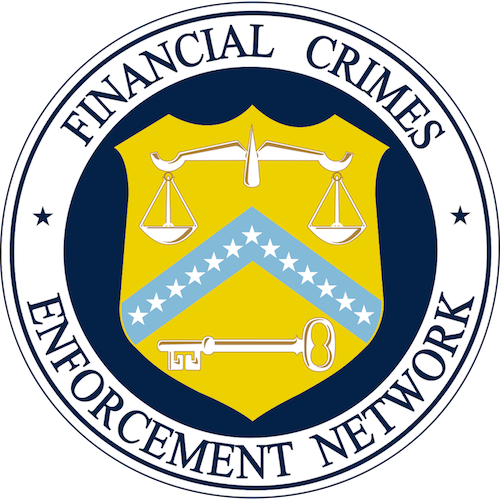 Seal of the United States Financial Crimes Enforcement Network (Photo: U.S. Government)Merchants Bank of California allowed billions of dollars to "flow through the U.S. financial system" without oversight to detect or report any suspicious activity, a statement from FinCEN said.

The bank also failed to conduct due diligence on foreign correspondent accounts, the agency said.

The bank specialized in providing banking services for check cashers and money transmitters, but it failed to properly assess the risks of money laundering or design an effective anti-money laundering program, the statement said.

Often times, such services were provided to businesses that transmit or convert money owned or managed by bank insiders who encouraged staff to process such transactions without question, the statement said, adding that the insiders directly interfered with regulators’ attempts to investigate suspicious activity tied to the insider-owned accounts. Activity in such accounts "went unreported for many years."

The bank was fined US$ 6 million by FinCEN and an additional US$ 1 million by the Office of the Comptroller of the Currency, the report said.

The agency also accused Merchants of not properly banking its customers in several jurisdictions considered to be high risk. The bank failed to identify such customers as foreign correspondents, and therefore didn’t implement the necessary customer due diligence program.

Over three months, Merchants processed a combined US$ 192 million in high-risk wire transfers through some of these accounts, FinCEN said.

According to Wall Street Journal, Merchants bank was one of the last resources Somali immigrants in the U.S. used to wire money to their families in Somalia. The bank ended the service in 2015, however, due to U.S. pressure.

Somalia — the most corrupt country on the planet according to Transparency International — makes nearly a quarter of its GDP through remittances, which the U.S. government feared would fall into the hands of terrorists there. As a result, nearly every financial institution stopped providing a path for those funds. Families in Somalia, however, say they are now unable to afford food or medicine, Wall Street Journal reported.