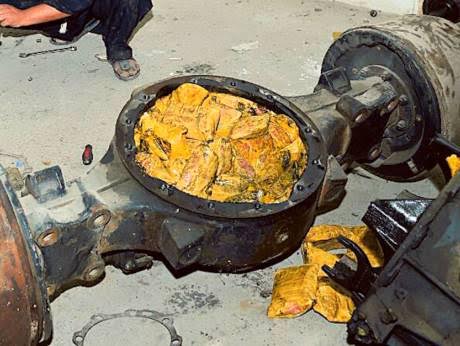 One of the trafficking groups is alleged to have used spare truck parts to store the drugs (Photo: Sharjah Police) In two major raids, police in Sharjah confiscated 1,270,000 Captagon pills and 300 kilograms of opium and estimated the street price of the drugs to a total of AED 46 million (US$ 12.5 million).

In one raid, police found suitcases full of Captagon pills in a Sharjah apartment that had been rented only a month ago. Captagon is an amphetamine believed to by be used by militants in Syria to endure the battle. It is popular throughout the Middle East.

Police said the two suspects arrested during the raid later confessed to the crime.

The alleged traffickers concealed the drugs in iron plated cans that drug sniffing dogs could not detect and smuggled them over the border with the intention of selling them throughout the Gulf, local media reported.

The third suspect, an Asian man, was arrested in a separate operation. Investigators believe he was collaborating with an international drug trafficking group.

Police apprehended the suspect at a warehouse where members of the ring allegedly stored opium smuggled in spare truck parts.

Police intercepted the stash before it could be sold. The suspect confessed he was awaiting orders from a supplier based outside of the country.