Monday's front page of the Serbian pro-government tabloid Informer renewed attacks on independent news organizations, accusing them of being “liars and racketeers” paid by the European Union and the US. 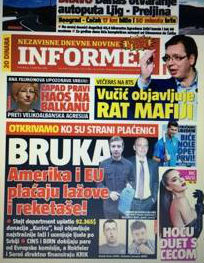 Front page of Informer, November 7, 2016The tabloid has frequently attacked the Crime and Corruption Reporting Network (KRIK), the Serbian Center for Investigative Journalism (CINS), the Balkan Investigative Reporting Network (BIRN), as well as the Serbian daily Kurir. According to Informer, the news organizations are paid by Western governments to destabilize Serbia.

Chief editor of KRIK Stevan Dojcinovic, who has endured a number of harsh personal attacks by the tabloid, told OCCRP that KRIK has been smeared by pro-government media since it was established.

“Those media which attack us are aligned with the government and the reason for their campaigns against us is our work on revealing corruption and crime in our country,” said Dojcinovic.

Informer's chief editor and owner Dragan Vucicevic, who has admitted having friendly relations with both Prime Minister Aleksandar Vucic and his brother Andrej, has been spearheading a smear campaign against the news organization for a long time.

Slobodan Georgiev, one of BIRN's editors, said Monday's Informer article represents “another step towards the criminalization of journalists.” Georgiev's photograph was published on the front page along with those of Dojcinovic, Kurir owner Aleksandar Rodic and CINS head Branko Cecen.

"We’re talking about criminalization by the people who are in power. They are creating an atmosphere to label us as foreign mercenaries in order to force us to make excuses for doing our job,” Georgiev told Balkan Insight.

The Russian law, adopted in May 2015, allows the government to freeze the assets and close the offices of any organization seen as a “threat to Russia's defense capabilities, security, public order, or public health”.

Cecen of CINS told Balkan Insight, “Russian law on NGO's has practically stopped the NGO sector in that country, so what Andjelkovic says might be a verbalization of the wishes of some in the Serbian executive.”

One of the main reoccurring themes in Informer's attacks is the funding of independent news organizations. For example, the tabloid attacked KRIK over receiving money from the Rockefeller Brothers Fund, which is, according to Dojcinovic, not a revelation since the organization has never hidden this fact.

“It just happens that they [Informer] call us once a month without reason,” Dojcinovic told Balkan Insight.

Dojcinovic says another recent article, published by the local newspaper Srpski Telegraf, is more dangerous than the continuing attacks by Informer.

In the article, Srpski Telegraf misrepresented an investigation into the property of Prime Minister Aleksandar Vucic and his family published by KRIK in April, portraying KRIK and other media as working towards overthrowing Vucic by attacking his family, namely his brother Andrej Vucic.

The article comes at a sensitive time, as tabloids are reporting on a possible assassination attempt on Vucic. Local media reported a stash of weapons was found near Vucic's home, sparking media speculations the weapons were intended to assassinate the Vucic brothers.

“Such articles about us and other independent media place a target on us, and they are frequently followed by threats we receive from people we don't know,” says Dojcinovic, adding that such a case happened recently.

In July this year, KRIK journalists reported they received a number of threats via social media, calling for them to be “lined up and shot as foreign agents in Serbia”.

KRIK complained to prosecutors, but the complaint has not produced any results to date, says Dojcinovic.

Dojcinovic also says there is evidence that KRIK is being followed and wiretapped, as Informer's articles frequently report confidential information obtained by this illegal wiretapping operation.

“This is abuse of state security institutions, when they are used for conflict with journalists,” says Dojcinovic.