Bosnia and Herzegovina: Prison for 13 in “Doll” Case

The Court of Bosnia and Herzegovina on Wednesday handed down more than a century in prison terms to 13 members of a criminal group labeled by prosecutors as the largest in the country since the end of 1992 to 1995 war. 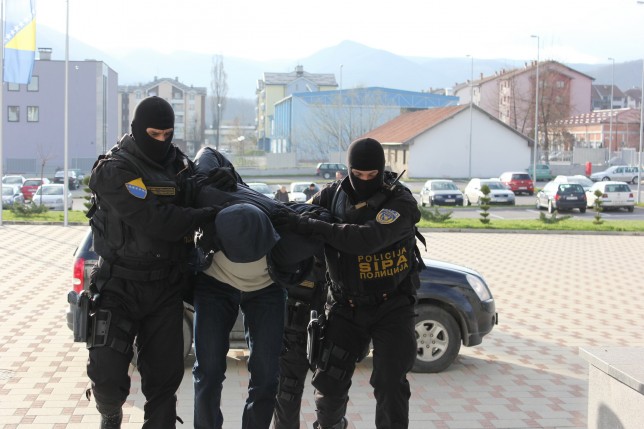 State police arresting one of the suspects in the "Doll" operation in 2013 (Photo: sipa.gov.ba)The defendants – part of a network engaged in a decade-long string of crimes including robberies, murders and money laundering – were arrested in a crackdown initiated in 2011 under the codename “Lutka” (Doll). Their trial is one of several that sprang from an indictment filed in 2013 against 32 people from across the country’s ethnic lines.

The network robbed banks, armored cars and post offices of a total of more than 10 million Bosnian marks (US$ 5.75 million) and engaged in the “mafia liquidation style” killing of at least six people, including through the use of ambushes and remote controled bombs, Prosecutiors' Office spokesman Boris Grubesic said in a release sent to media.

Wednesday’s verdict saw 13 people convicted and sentenced to a combined 101 years and eight months in jail. Another three defendants were acquitted.

Wednesday’s heaviest sentence was handed to former policeman Bojan Cvijan, who received 20 years in prison for murder, robbery and conspiracy to commit crimes.

Interpol earlier this month issued a Red Notice for former Playboy model Slobodanka Tosic, who fled house arrest after she was sentenced in March to 2.5 years in prison for her role in a murder attempt organized by members of the group.