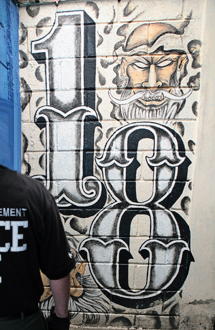 Spanish law enforcement said the man was part of an effort ordered by gang leaders in Central America for the group to establish a foothold in Spain.

The 18th Street gang, also known by a number of other names including Barrio 18 and Mara-18, began in the US city of Los Angeles in the 1960s and was initially mainly comprised of Mexican immigrants. Over the decades, the group has has shifted much of its activities and membership to Central America, and is now one of the region’s most feared crime groups.

The gang has been a main antagonist in brutal Central American gang wars that have seen the region endure the world’s worst murder rates. The group lacks top down leadership, and is instead organized into a network of semi-autonomous territorial “cliques.” The gang is involved in crimes ranging from auto theft to drug trafficking and prostitution.