Nikita Belykh, governor of the Kirov Region of Russia, was arrested on Friday on charges of accepting bribes after the Investigative Committee of the Russian Federation caught him accepting a large sum of money in a Moscow restaurant. 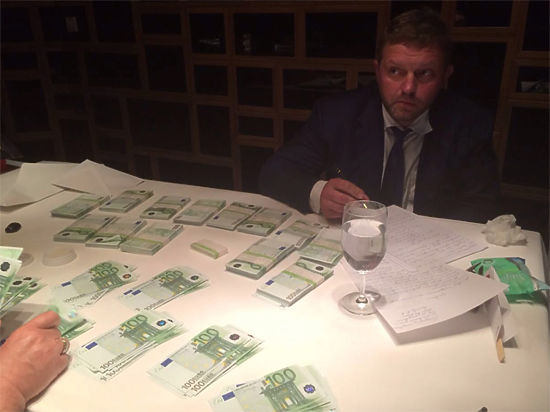 The committee released a photo of Belykh, with the alleged bribe on the restaurant table. The money consisted of 100 Euro bills totaling € 400,000. Belyhk is accused of taking the bribe to secure the interests of the “Novovyatskiy Ski Factory JSC” and “Forestry Management Company LLC” in the Kirov Region.

Belykh’s lawyer, Vadim Prokhorov, has filed a complaint stating that prosecutors have not been cooperating with him.

“Investigator Roman Mukhachev refuses to communicate with me by cell phone; other investigators do not pick up my calls to their office number; everybody has disappeared. I can’t get permission from the investigation to be involved in the proceedings, although I am the only lawyer, according to the agreement. This violates my client’s right to defense,” Prokhorov told local Russian media outlet Interfax.

Belykh pleaded innocent in court on Saturday and has since stated that while he did accept the money, he did it for the interests of the Kirov Region and not as a bribe.

The arrest of Belykh shocked the country as other politicians tried to understand what could have happened.

Russian politician and Vladimir Putin critic Alexei Navalny took to his blog to share his disbelief regarding Belykh’s arrest.

“It is extremely difficult to imagine that Belykh got here by getting a bribe. Cash. In a Moscow restaurant.”

Nikita Belykh is well known in Russia for his past affiliation as leader of the “Union of Right Forces (SPS)” political party, which was critical of the Kremlin and leaned towards Western-style democracy. Former SPS leader Boris Nemtsov was murdered in Moscow in 2015.

According to The Moscow Times several politicians have said that they don’t believe the photos.

In a press release, Investigative Committee spokesman Vladimir Markin said, “Anticipating the hysteria that rises in such cases, I want to calm the mood. Corruption crimes have no political color.”