Authorities arrested and charged a representative of Reporters Without Borders (RSF), a writer, and an academic with spreading terrorist propaganda after they joined a solidarity campaign surrounding a newspaper that focuses on the conflict between the government and a Kurdish militant group, Bloomberg reported. 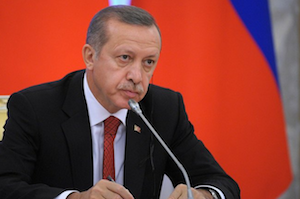 Recep Tayyip Erdogan (Photo Credit: Wikipedia)RSF called the arrest “an unbelievable low” on Twitter, while the Committee to Protect Journalists (CPJ) called for the immediate release of the trio, and for authorities to drop charges.

Those arrested were RSF Turkey representative Erol Onderoglu, writer Ahmet Nesin and Human Rights Foundation of Turkey President Sebnem Korur Fincanci. RSF said that the three were among those serving as guest editors of the daily newspaper Ozgur Gundem, and wrote that Onderoglu was being prosecuted over three articles that talked about power struggles in Turkish security forces and operations against the Kurdistan Worker’s Party (PKK).

Index on Censorship wrote that Turkish authorities began investigations in May that focused on those who participated in the solidarity campaign.

Onderoglu has worked for years to defend persecuted journalists, while Fincanci is a famous forensic scientist whose name is on the Istanbul Protocol, the guidelines established by the United Nations in 1999 for investigating alleged torture. Deutsche Welle wrote that Nesin is the son of iconic Turkish writer Aziz Nesin, and some believe his arrest was symbolic in nature.

Since World Press Freedom Day in early May, journalists and activists had mounted a show of solidarity by taking turns acting as symbolic co-editors of the newspaper. So far, criminal investigations against at least 37 of the participants have been opened by prosecutors, CPJ reported, and media said over the weekend that authorities had questioned some others who were also guest editors.

RSF’s 2016 World Press Freedom Index ranks Turkey 151st out of 180 countries for press freedom, writing that the Internet is censored and journalists are harassed as part of an offensive against media by President Recep Tayyip Erdogan.

Ertugrul Mavioglu is scheduled to go on trial in September, on charges of “openly provoking the people to commit crimes,” “praising a crime and a criminal,” and “making propaganda for a terrorist organization,” CPJ said.  He was a co-editor of the paper for an edition published on May 10.