Svetozar Marovic, a close associate of Montenegrin Prime Minister Milo Djukanovic and a high-ranking official of the ruling Democratic Party of Socialists (DPS), has quit politics after signing an agreement with the Special Prosecutor and admitting several crimes, including heading a criminal organization that embezzled tens of millions of Euros from the state budget. 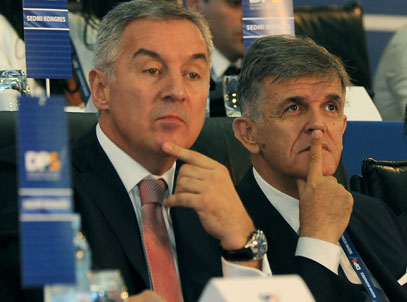 Prime Minister Milo Dukanovic, left, and Svetozar MarovicIn his resignation letter, Marovic states that he does not want to tarnish the DPS, saying that the party knew nothing of his activities.

Djukanovic, who is also president of the DPS, said that Marovic alone was responsible and that the criminal proceedings will in no way affect the party’s prospects in the upcoming October Parliamentary elections.

History would appear to bear him out. Over the past five years, several dozen DPS officials have been prosecuted for serious corruption-related crimes without any apparent impact on the party. Two former mayors of Budva and the former mayor of Bar were prosecuted for corruption in selling municipal land, along with dozens of municipal employees. Several DPS party activists were also prosecuted for misuse of social welfare for buying votes during the last elections.

The political opposition, however, says that Marovic’s resignation does not absolve the DPS from responsibility.

Milos Konatar, a parliamentarian from the opposition URA party, said that “all of the crimes that Marovic did, and all of the millions that he took from the budget, all of that was made possible by the DPS  and Prime Minister Djukanovic personally by granting him a political position and the opportunities to abuse it.”

Veselin Radulovic, a legal advisor to the anti-corruption watchdog MANS, said that Marovic abused his political position in DPS. “There is no way he could commit these crimes if he was not positioned so high in his party,” said Radulovic.

Prosecutors said that Marovic’s agreement with the Special Prosecutor means he will serve four years and three months in state prison and pay a fine of € 1 million (US$ 1.11 million). Prosecutors also said that investigations into the alleged criminal group are continuing.

Earlier this year, Marovic’s son, Milos Marovic; and his brother, Dragan Marovic; signed similar agreements with the Special Prosecutor, admitting to crimes committed as members of Marovic’s criminal organization. Last year, OCCRP and local partner MANS helped to trigger the investigation of the Marovic family with an investigation into millions that were stashed in the HSBC account of Svetozar Marovic's wife.

None of the agreements between the Marovic family and the Special Prosecutor have been made public.