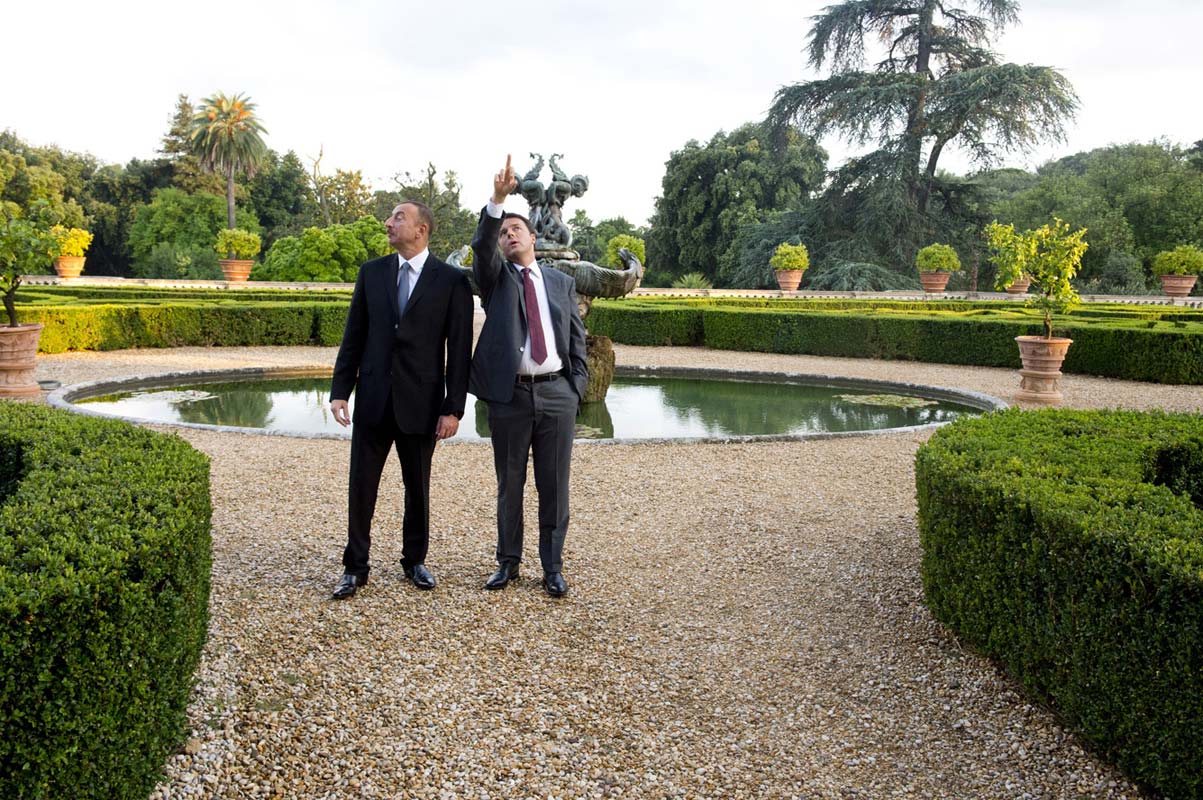 Azerbaijani President Ilham Aliyev, left, gets a tour from the president of Italy's Council of Ministers, Matteo Renzi, at their meeting in July 2014.Vincenzo Amendola, undersecretary of the Ministry of Foreign Affairs, called Ismayilova’s May 25 release from prison a “positive development” and said he hoped “the travel ban [against her] will be revoked and that other individuals subjected to restrictions on their movements because of political reasons will be released.”

Ismayilova was jailed in December 2014 in connection with a series of charges ranging from inciting a colleague to attempt suicide to tax evasion. She was subsequently convicted and sentenced to 7.5 years in September 2015 but released after serving 18 months.

She has insisted from the beginning that the charges were bogus and she was in fact jailed in retaliation for stories detailing widespread corruption and insider deals involving the Azerbaijani regime, including members of President Ilham Aliyev’s family.

Italy’s official statement came in response to a question filed by parliamentarians of the ruling Democratic party one year ago. “There was international concern about the arrest of Ismayilova, so we embraced [her] appeal to publicly ask and advocate for her release,” Democratic member of Parliament Sandra Zampa told OCCRP.

They also acknowledged the important relationship between Italy and Azerbaijan, as “the current President Ilham Aliyev nominated his country as privileged commercial partner and reliable supplier of oil and gas for Europe.”

While oil supplies from Azerbaijan have declined in recent years, Italy remains the world’s primary importer of Azerbaijani crude petroleum, according to global trade data, with exports to Italy accounting for almost a quarter of all the crude oil exported by Azerbaijan in 2014.

Those ties are expected to grow in the next few years, when the new Trans Adriatic Pipeline – currently under construction – will reach its full potential, bringing to Italy up to 20 billion cubic meters of natural gas per year. The Italian energy giant ENEL, which is partly owned by the government, has committed to buy Azerbaijani gas for at least 25 years.

The Democratic parliamentarians further asked the government “to verify whether the rights of the journalist Khadija Ismayilova have actually been violated and to monitor the fulfillment of human and freedom rights (in particular freedom of expression) in Azerbaijan, and to contribute to their strengthening.”

In his statement, undersecretary Amendola said  that Italy supported all the efforts made by European and international human rights and political bodies to obtain Ismayilova’s release. While he never referred to her as a political prisoner, he did say that Italy will continue to advocate for human rights in Azerbaijan.

Zampa later told OCCRP that in her official response, she stressed that “Khadija has to be considered a political prisoner …  We could always do more, but the diplomatic activity is moving in the right direction”.

“The government showed itself sensitive to this matter,” agreed Michele Nicoletti, another parliamentarian from the Democratic Party who has actively advocated for Ismayilova’s release in his position as President of the Italian Parliamentary Delegation to the Council of Europe. He said he hoped Italy would continue to push for human rights in its bilateral relations with Azerbaijan.

The Azerbajani Embassy in Italy declined to comment on Thursday’s statements. Last year, after Zampa filed the original parliamentary question, the embassy accused her of representing the interests of Armenia, claiming she was the president of the Parliamentary Association “Friends of Armenia”, a position she quit several years previously.

This story was contributed by Federico Pignalberi