Luxury villas in the middle of a forest, near a 15th century monastery, are part of plans by a foreign investor who offered the services of unregulated workers to evade building standards and pay less money relating to taxes and construction fees, according to an investigation from OCCRP partner RISE Moldova. 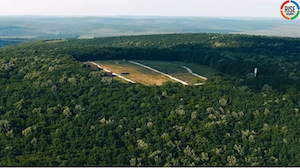 (Photo Credit: RISE Moldova) RISE Moldova said that Igor Rimmer, a citizen of Cyprus, was able to purchase several hectares of land formerly used for agricultural purposes. The site is near the Capriana monastery, one of Moldova’s oldest, and the region has one of the nation’s main highways passing through it. Rimmer is primarily involved with business concerning property and construction management, and has worked in nations including Kazakhstan and Bulgaria.

Moldovan law says that foreigners can not purchase land designated for agricultural  purposes, but another businessman, Boris Donets, was able to help Rimmer get around the restrictions. Donets purchased the land with his firm, Conreir SRL, and then sold the land to Rimmer, also ensuring that Rimmer would become the sole shareholder of the company. Donets went to the government to change the classification of the land in order to be able to make the sale.

Donets said that he does not do business with Rimmer anymore, and that the company is now Rimmer’s. Meanwhile, documents from RISE Moldova suggest a continued connection between the two. For example, the current administrator of Conreir is a business partner of Donets’ daughter.

An employee from Conreir said that they only provide basic infrastructure, and that it is up to the buyer to contract villas that comply with regulations on architecture. However, when speaking to an undercover RISE Moldova reporter, the same employee said that prospective clients could “avoid accounting costs of construction” by agreeing to a company offer of unregulated workers, ultimately resulting in a cheaper villa for the customer.  The average price of lots in the complex is usually more than 2 million Moldovan Lei (US$ 100,000).

RISE Moldova wrote that Rimmer has bought land near Pirin National Park, a UNESCO World Heritage national park in Bulgaria, and is also planning to build villas in the area.