Mexican authorities said today that they had rescued footballer Alan Pulido shortly before midnight Sunday after he was kidnapped on Saturday night, according to a release from the State Government of Tamaulipas. The release said that he was being medically assessed. 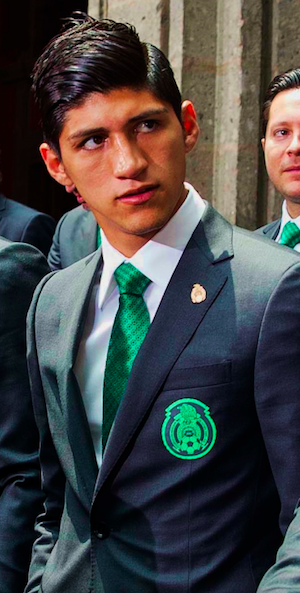 Alan Pulido (Photo Credit: Wikipedia) Pulido, 25, a striker with the Greek team Olympiacos was kidnapped by six masked men near Ciudad Victoria, in Tamaulipas state after leaving a party. The men reportedly surrounded a car Pulido and his girlfriend were in with several trucks and took the footballer away by force, BBC reported.

Authorities have not provided many details yet on the operation, but a state police spokesperson said that one suspect had been arrested, the Associated Press (AP) wrote. Reporters said that there were multiple helicopters flying over an unusual number of soldiers and police officers who were seemingly searching for the player.

After being rescued by state and federal police, Pulido appeared in a video on Twitter alongside Tamaulipas Gov. Egidio Torre Cantu with a bandaged hand. He told reporters that he was “Very well, thank God,” AP said.

Ciudad Victoria has been hard hit by activity by both the Gulf Cartel and its former armed wing, Los Zetas. A Mexican think tank, the Citizen Council for Public Security and Criminal Justice, said that the city was the second most dangerous in the nation for kidnappings, and Animal Político reported that Tamaulipas has the highest rate of kidnapping in the country.

Pulido was left off the squad for the Copa America tournament due to a legal dispute with his former club Tigres over the validity of his contract, according to the AP. Pulido, who left the Mexican club in 2014 for Europe, has the quality to be on the Mexico squad, according to its national team coach.