Documents obtained by the Balkan Investigative Reporting Network (BIRN) show that the Macedonian deputy prime minister in charge of economic affairs also serves as the director of an active Cyprus-based company – breaching the law on conflict of interest. 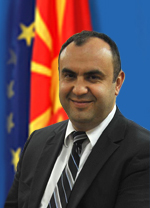 Vladimir Peshevski (Photo: Government of the Republic of Macedonia)Balkan Insight reports that Vladimir Peshevski, who has served as deputy prime minister for the economy since 2009, has established the company Fertissimo Investment Ltd Limited three years earlier, while serving as the head of Small Enterprise Assistance Funds (SEAF), an investment management group. Within SEAF, Peshevski was “chief investment adviser in the sale of several Serbian and Kosovar companies to foreign investors in total market value of around 100 million Euros (US $111,9 million),” according to his biography.

Fertissimo Investment Ltd was established in the tax haven of Cyprus in April 2006, and Peshevski, a member of the ruling VMRO-DPMNE party, never stepped down as director of the offshore company after he came into office in June 2009.

According to Balkan Insight, he remained director despite his government position on purpose, telling BIRN journalists, “After the completion of my political career, I planned to continue with the company”.

He also reportedly said that all profits he made through the company with those consulting services were reported to the Public Revenue Office, and that all relevant taxes were paid. According to audit reports Peshevski reportedly showed BIRN journalists, Fertissimo had no income between 2009 and 2015. He also reportedly showed the journalists the firm's tax return for 2009, which states that he paid the relevant taxes that year.

While serving in his government position, Peshevski received no salary from Fertissimo, but he did pay the relevant fees needed to keep the company alive.

According to Balkan Insight, Peshevski is aware that by not reporting the company he is in breach of the Law on Prevention of Conflict of Interest.

He reportedly told BIRN journalists, however, that he does not personally believe he breached the law as no illegal enrichment took place.

The revelations prompted Macedonia's main opposition party, the SDSM, to demand an investigation into the case. At a Friday press conference, SDSM spokesperson Peter Shilegov put forward a number of questions, including why the fees from the consulting services Peshevski provided at the time went through an offshore company in Cyprus.

In Peshevski's answer, according to local news portal Vistina, he states that while working as a consultant before his political career, he worked with clients from countries of the European Union, “so it was quite logical that part of the activities went through a company registered in an EU country.”

He maintains all activities the company was engaged in are completely frozen since his time in office, that the company has no active contracts or movable or immovable property, and that his function as director is thus completely passive.

His statement further reads, “All other insinuations of possible corrupt activity of the company and conflicts of interest are completely pointless because the company is completely inactive….”.

According to Article 9 of Macedonia's Law on Prevention of Conflict of Interest, “The Official who, before assuming office, as a proprietor had solely managed a trade company or institution carried out a profession or other private activity, during the time of discharging of the official function pursuant to Law, shall delegate the management to another person or separate body.”