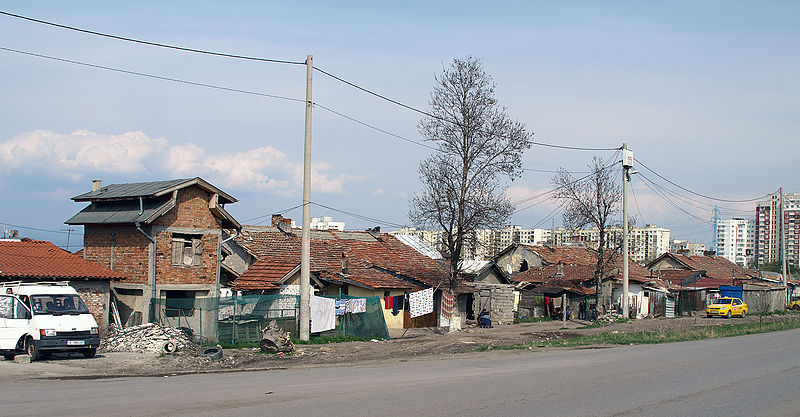 The Filipovtsi neighborhood, Sofia (Photo: Edal Anton Lefterov, Wikimedia Commons)The crackdown on the group was initiated on Thursday, and seven people, among them suspected ringleader Janusz Yordanov, were arrested. The two remaining suspects were released on bail, and one more suspect is on the run.

Yordanov is the deputy chairman and political council member to the biggest party assessing the problems the Roma minority faces in Bulgaria, the Euroroma, led by Tsvetelin Kanchev.

Police say the group operated in Sofia's Filipovtsi district – a neighborhood in the capital predominantly populated by members of the Roma minority. Authorities questioned more than 30 witnesses and searched ten locations, finding documentation which serves as proof for the illegal activities (among them promissory notes, lease contracts, and lists of persons, bank and ID cards of debtors), pawned cars, as well as 15,000 Euros (US$ 17,000), 15 thousand Bulgarian Levs (US$ 8,700) in cash, a grenade and an illegally owned gun.

Police says that their investigation has revealed the group had long operated in the district, providing loans for individuals who would put up their cars and property as guarantees for the loans. The victims would not receive their property back even if those loans were paid off in time. According to local News.bg portal, the victims would be told they owe interest.

According to the local Novinite news agency, the group had recently reoriented their activities towards smuggling migrants through Bulgaria. They had recruited a number of drivers who transported the migrants towards Western Europe.

Police found thirty foreigners in a house owned by the alleged ringleader, Yordanov. The migrants, who identified themselves as coming from Syria and Afghanistan, were subsequently handed to the migration directorate of the Interior Ministry.

Euroroma leader Tsvetelin Kanchev was arrested for his alleged involvement in a case of blackmail in 2009, but was found not guilty in a first instance ruling in 2012.