The Brazilian Senate is set to decide on Wednesday if President Dilma Rousseff should go on trial after an earlier call to halt action against her was reversed, the Financial Times (FT) wrote. 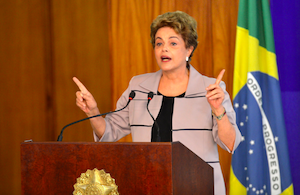 The New York Times said that lawmakers in the Chamber of Deputies (lower house) of Congress voted for impeachment in mid-April, sending the case for a vote in the Senate. However, Waldir Maranhao, the leader of the lower house, said on Monday that a new vote should be conducted, claiming that procedural flaws rendered the earlier vote invalid, Reuters reported. The Supreme Court declined to overturn the annulment, but Senate leaders said they would push forward with a vote after a committee recommended a trial on Friday.

FT said that Maranhao revoked his call last night in a statement. He took the helm of the lower house last week after the removal of speaker Eduardo Cunha due to an impending corruption trial, the New York Times reported.

If the Senate decides to send Rousseff to trial, and she is found guilty, presidential duties would be assumed by Vice President Michel Temer until elections in 2018, Reuters wrote. Temer also potentially faces impeachment proceedings because he signed off on the same policies as the president.

Former finance minister Guido Mantega was also detained for questioning on Monday as part of an investigation into bribery at a tribunal that resolves disputes between the tax agency and big taxpayers, according to the Wall Street Journal. He was Brazil’s longest-serving finance minister under Rousseff and her predecessor Lula, and is suspected of helping to reverse US$ 16 million in fines levied on a cement company called Cimentos Penha.