Azerbaijani investigative reporter Khadija Ismayilova won the 2016 UNESCO/Guillermo Cano World Press Freedom Prize today from behind bars in a Baku prison. The award marks World Press Freedom Day and will be received at an awards ceremony by her mother, Elmira, today in Helsinki, Finland. 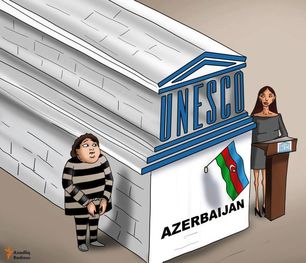 Ismayilova, an award-winning reporter who exposed the corruption of the ruling Aliyev family, has been in prison in Baku since her arrest on Dec. 5, 2014. A Baku court sentenced her to 7½ years in prison on Sept. 1, 2015, on charges of tax evasion, abuse of power and inciting a man to suicide

She will be celebrating her 40th birthday in jail on May 27.

The prize comes amid political intricacies. Azerbaijan’s first lady Mehriban Aliyeva is one of UNESCO’s Goodwill Ambassadors and also a target of Ismayilova’s investigations, which exposed extensive corruption linked to the presidential family. Emin Milli, managing director of independent Azerbaijani news site and OCCRP partner center, Meydan TV, expressed his disappointment at the failure of UNESCO’s Director-General Irina Bokova, to use the opportunity to press the government of Azerbaijan for Ismayilova’s release.

“How is it possible not to use this moment to address this issue directly with Goodwill Ambassador Mehriban Aliyeva and the president of Azerbaijan? You cannot be the goodwill ambassador of UNESCO and your husband keeping independent journalists getting the UNESCO prize in jail.”

Milli recently learned that 15 Meydan journalists, himself included, are under criminal investigation on similar charges.

“People are afraid to do very basic journalistic activity because journalism is a crime in Azerbaijan,” said Milli.

Azerbaijan scored 89 out of 100, 100 being the worst score, on the 2016 Freedom of the Press report published by Freedom House and is 163 out of 180 countries ranked on the 2016 World Press Freedom Index by Reporters Without Borders.

Today, in Moldova, journalists protested Ismayilova’s imprisonment in front of the Embassy of Azerbaijan in Chisinau. 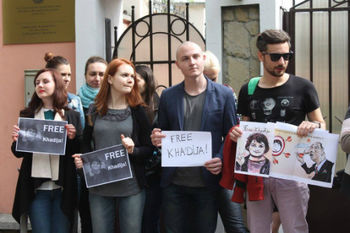 Ismayilova’s case is testament to the state of press freedom this year. World Press Freedom Day marks a bleak year for journalism around the world. Reporters have faced censorship, attacks and imprisonment, sometimes paying the price with their lives. This year’s statistics mark a bad year for journalists around the globe.

Journalists Under Fire for ‘Doing Their Jobs’

Press freedom has declined to its lowest point in 12 years in 2015, according to the 2016 World Press Freedom report published by Freedom House. The countries that suffered the largest declines last year are Bangladesh, Turkey, Burundi, France, Serbia, Yemen, Egypt, Macedonia, and Zimbabwe.

Only 13 percent of the global population enjoys a free press, Freedom House says. Those places are defined by an environment in which the safety of journalists is guaranteed, state intrusion in media affairs is minimal, coverage of political news is robust, and the press is not subject to heavy legal or economic pressures.

The past year has seen Europe facing a decline in media freedoms as journalists faced the threat of violence from extremists, such as the Charlie Hebdo attacks in Paris last year, and pressure from their own governments with new surveillance and anti-terror laws and verbal attacks and interference from politicians, Freedom House reported.

Reporters Without Borders (RSF, for its acronym in French) has also remarked on a “progressive erosion of the European model.” The organization says governments and the private sector are increasing control over newsrooms. Among the most stark examples, Poland fell furthest on RSF’s 2016 World Press Freedom Index, down 29 places as its right-wing government seized control of private media.

Political leaders seem to be more paranoid about journalists, according to an analysis by RSF. The index also highlights Tajikistan dropping 34 places to 150 as a result of growing authoritarianism.

Amnesty International spotlighted nine cases of journalists who have been imprisoned, threatened tortured or killed for speaking out. Besides Ismayilova in Azerbaijan, they have included Mexican crime reporter Anabel Flores Salazar, who was murdered in February 2016; Egyptian photojournalist Mahmoud Abu Zeid, also known as “Shawkan”, who has spent nearly three years in jail after photographing security force violence against protesters in Cairo,and Sedrick de Carvalho and Domingos da Cruz of Angola, who remain prisoners of conscience after being arrested for taking part in a reading group discussing democracy and freedom.

“We’ve been closely watching her case and campaigning on her behalf. The authorities have been unresponsive to international demands,” he continued, “There are several people in prison in Azerbaijan, primarily prisoners of conscience in prison for trumped-up charges, and we have been campaigning for their unconditional release.”

“We hope she will be freed,” Krivosheev said.