Police have arrested at least twelve people in connection with the theft of paintings worth around US$ 16 million from Verona’s Castelvecchio museum, Reuters reports. 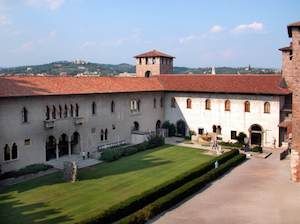 The artwork has not yet been recovered, but may be in Moldova. Prosecutor Gennaro Ottaviano called the theft the “robbery of the century,” Italian daily Corriere Del Veneto wrote.

The robbery sparked various theories. Some speculated the thieves were under commission from a private collector.  Others thought the robbery was an inside job.

Authorities identified the suspects after analyzing 4,000 hours of video and hundreds of phone calls, the New York Times said.

Three thieves managed to break into the museum on November 19th last year, just as it was closing but before the alarms were turned on.

One watched over the immobilized cashier and security guard, while the other two carefully took paintings off the walls and out of their frames, the Washington Post reports. Authorities released a video of the robbers making their escape in two vehicles.

Speaking about the arrests, investigator Renato Cortese said the offense to the city of Verona was partially repaired, but will “be totally repaired when we can bring home our treasures,” the Washington Post reported.

Italy has a special branch of police, the Carabinieri for the Protection of Cultural Heritage and Anti-Counterfeiting, known as the Carabinieri Art Squad. It combats theft, illegal excavations of archaeological sites, and trafficking and counterfeiting of stolen property, focusing on property connected to Italy’s artistic, historical and cultural heritage.

The Caribinieri Art Squad’s website said the force has been in operation since 1969 and is considered a worldwide leader in its field. It often operates with international police forces and intervenes in crisis areas alongside peacekeeping missions.

The US FBI says that art and cultural property crime is a looming criminal enterprise, with estimated annual losses in the billions of dollars.