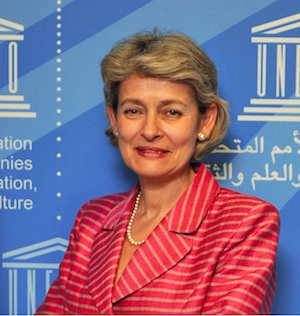 Irina Bokova (Photo Credit: Flickr) The Ministry stated that “with her biography and experience, Irina Bokova may be one of the important candidates in the upcoming campaign.” Bokova is known for her supportive attitude towards the first family of Azerbaijan, and has promoted First Lady Mehriban Aliyeva in the role of UNESCO Goodwill Ambassador. Just last year, Azerbaijani authorities sentenced OCCRP partner Khadija Ismayilova to 7.5 years in prison on charges that human rights groups say are politically motivated.

According to the Council on Foreign Relations blog, the Secretary-General is chosen by an informal system of regional rotation, with many speculating that a candidate from Eastern Europe will be chosen next.

Bokova is described as a strong candidate from Bulgaria, but OCCRP partner Bivol has questions regarding property she owns in Manhattan that is worth more that US$ 3 million. Bivol questions in an investigation it conducted whether her family could afford the property based on their known income.

Bokova also attempted to withdraw a confidential report that described her role in a scandalous job appointment, according to Bivol. The investigation found that Anita Thompson-Flores was briefly appointed to the position of Assistant Director-General for Strategic Planning without submitting the required credentials. Instead of firing her, Bokova sent her to the UNESCO office in Venice.