A mysterious company called EnergoKapital, based in Transnistria, stands between Moldova’s state-run power company Energocom and the Cuciurgan thermoelectric power station which provides up to 80 percent of the country’s electricity, according to EurasiaNet.

“No one — not even government officials — can state who actually owns the company that provides most of the power for this country of 3.6 million,” EurasiaNet reports. 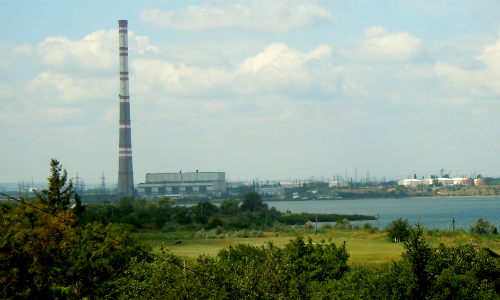 MoldGRES/Cuciurgan Power StationThe revelation comes at a time of mass civil unrest in the country as Moldovans have held protests against corruption, fraud and the disappearance of US$ 1 billion from three banks that were ultimately bailed out by taxpayers.

Adding fuel to the fire are high electricity prices, which have risen by 37 percent since last November.

Transnistria is a strip of territory between the Dniester River and Moldova’s border with Ukraine. According to the report, Moldova’s state-run electricity provider, Energocom, gets most  of its electricity directly from the Cuciurgan thermoelectric power station in Transnistria.

For the past 11 years, the station has been controlled by Russian energy company RAO via its subsidiary MoldGRES, the official name for the Cuciurgan power station. Then, in late 2014, Energocom began receiving its electricity via an intermediary company, EnergoKapital.

The economic analysis website Mold-Street.com alleged EnergoKapital was founded, registered and licensed in a matter of days in October 2014 by “people close to [Transnistrian leader] Yevgeny Shevchuk.” It also alleged the company had ties with Russian giant Gazprom and that EnergoKapital purchased Russian gas to fuel the Cuciurgan plant.

Early last October, former Prime Minister Ion Sturza claimed on Romanian newspaper Cotidianul.ro that the final beneficiaries of the “obscure” EnergoKapital were officials in Chișinău and Tiraspol. He said Moldova, which is entirely dependent on imported energy, was on the verge of “astronomical theft” through the energy sector.

EnergoKapital allegedly reaps between US$ 150-160 million a year from its activities, according to an estimate for EurasiaNet by Economist Sergiu Tofilat, an expert at the Institute for European Policies and Reforms in Chișinău.

Economy Ministry spokesperson Nicoleta Pădureț said the ministry, which supervises energy policy, was not involved in negotiating the company’s contract with Energocom. The government claims the contract was concluded roughly a month and a half after EnergoKapital was registered as a company yet last October ANRE, Moldova’s national energy regulators, extended EnergoKapital’s license for six months.

Deputy Economy Minister Valeriu Triboi alleged last October during a news conference that separatist authorities in Transnistria had imposed EnergoKapital on the Moldovan government after Ukraine cut electricity supplies to Moldova in late 2014. Ukraine had supplied roughly half of the country’s power up until that point.

Victor Parlicov, ex-director of Moldova’s Energy Regulatory Commission, told EurasiaNet, “EnergoKapital could not occur without the consent of MoldGRES, and [it] could not accept the scheme without the final approval from shareholders of [Russia’s] Inter RAO,” which owns MoldGRES.

Moldova’s Intelligence and Security Service declined to discuss EnergoKapital with EurasiaNet. They emailed the journalists in response to a request for information that “the matter is currently under investigation by the state authorities.”

An earlier version of this story incorrectly identified which countries recognize Transnistria as an independent entity. OCCRP regrets the error.