Two Lithuanian men have been sentenced to 3.5 years in jail each by the Kings Lynn Crown Court for cheating two fellow countrymen who were starved and forced to work for low wages, according to a news release. 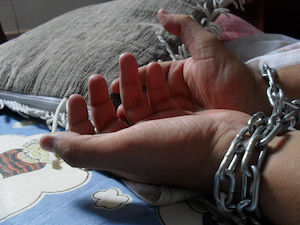 According to the Guardian, the victims were twins. One, Edvinas Subatkis, had learning disabilities while the other, Edgarus Subatkis, was of limited education. Police say they received only £20 (about US$ 28) for four months’ work in 2013.

Both were reportedly lured from Lithuania to the United Kingdom with the promise of work, accommodation and food; the victims were found wearing the same clothes they had arrived in, and both had lost substantial amounts of weight.

They told investigators they were fed bread, margarine, onions, and ketchup with occasional ground meat; the amounts were so small they often ran out and were forced to go hungry for days.

Linus Ratautas and Konstantin Sasmurin were convicted of trafficking and money laundering in connection with the case. The Guardian reports that the pair found jobs for the Subatkis brothers at a pea processing factory in Suffolk, where Ratautas arranged for their pay to be deposited directly into his bank account.

After four weeks, the twins were reportedly moved to a chicken factory. They were told they owed the traffickers money for accommodation, transport and electricity, according to the news release.

The brothers allegedly feared that if they told anyone about the conditions they would have their bones broken, be “dug under” or “fed to the crabs,” according to the Guardian.

A factory human resources manager interviewed the Subatkis brothers after being alerted to a problem and contacted the Gangmasters Licensing Authority (GLA), an agency that oversees workers in the agriculture and fishing industries.

Det. Sgt. Mark Scott called the case “another example that modern day slavery is real and is happening around us.”