A Hungarian company has bought dozens of luxury apartments in one of Budapest’s most elegant streets in connection with a program that grants foreigners the right to live in Hungary if they buy government bonds, reports OCCRP partner Direkt36. 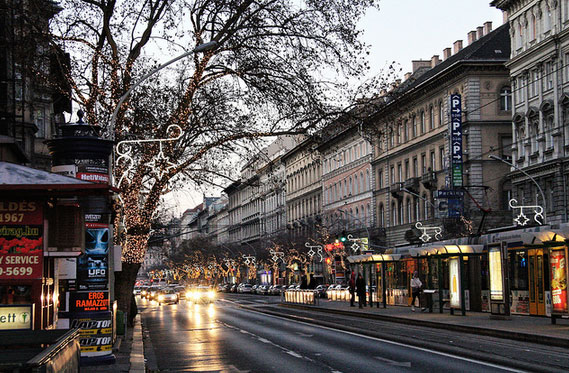 Andrássy Avenue at the heart of Budapest.The purchases took place in 2014, a year after the bond program began.

More than half of the real estate units (44 apartments and retail properties) in a building complex on Andrássy Avenue at the heart of Budapest were bought by Avenue Garden Holding, according to official records.

The bond program, which has been criticized by opposition and independent economic analysts, was initiated in late 2012 by Antal Rogán, then the leader of the parliamentary group of Fidesz, the ruling party in Hungary. Rogán, who is now the prime minister’s chief of staff, at that time was head of the parliamentary committee of economics and information technology.

The program carves the world into regions, and selects companies to sell bonds in each of those regions. The companies are chosen without public tenders and are almost exclusively registered in offshore jurisdictions, masking their ownership structure.

The most lucrative market for selling the Hungarian special bonds so far has been China, where a company named the Hungarian State Special Debt Fund (HSSDF) has permission to sell the bonds. It was registered in the Cayman Islands and operates from Hong Kong.

Yet HSSDF only sells the bonds, while another Hong Kong-based company, the Hungary State Special Debt Management Ltd. (HSSDML), is responsible for marketing, administration and public relations.

Avenue Garden Holding, the company that bought the luxury apartments on Andrassy Avenue, is connected to these two Hong Kong-based companies in multiple ways:

Avenue Garden Holding refused to disclose the purchase price of the properties. According to a real estate agent selling apartments in the Avenue Gardens building, currently apartments are sold for roughly € 2,000/square meter (US$ 2,100), which means that the current value of all the apartments and other premises acquired by Avenue Garden in 2014 is around € 8.9 million (US$ 9.6 million).

Since the bond program began, HSSDF has had more than 2,500 customers. According to the company and Hungarian government agencies, on average the company makes € 70,000 (US$ 76,000) per customer, so in total they have earned at least € 191 million (US$ 206 million) in the program.

Wang, the Chinese businessman managing the companies that own Avenue Garden Holding, refused to answer questions about what role the state bond firm played in the real estate deal. He also refused to disclose who owns HICL.

He declined to identify the private investors.