German and Turkish police Wednesday arrested 35 suspects and broke up a human trafficking ring that had been smuggling Syrian refugees across the Mediterranean and into Europe, according to the New York Times. 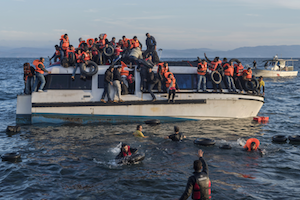 Police in Germany carried out 17 raids that netted 5 suspects, while Turkish authorities arrested 30 suspects across several cities and confiscated tens of thousands of dollars in evidence.

Dieter Romann, the head of Germany’s Federal Police, called the joint operation the biggest to date. He said that the raids “dealt an important blow to smugglers without scruples.”

Investigations began at the end of 2014 after the ring was allegedly linked to smuggling 1,776 migrants to the Italian mainland from Turkey on three derelict ships.

The traffickers charged an estimated US$ $4,500 to US$ 6,000 per passenger, netting more than US$ 9.3 million from the asylum seekers. The refugees were later rescued by the Italian Coast Guard after the ships broke down in the Mediterranean, according to Reuters.

Police said the traffickers set the ships on autopilot after leaving the Turkish coast, with no crew remaining on the vessel to care for passengers.

Romann said such “ghost ships” risk human lives “not out of an altruistic desire to aid escapes but simply to make money.”

Reuters reports that German Chancellor Angela Merkel is under pressure to slow the migrant flow into Germany, while the European Union is pressuring Turkey to stop human traffickers after more than 3,700 migrants died last year, according to Deutsche Welle.

German and Turkish officials have agreed to work together to crack down on criminal refugee smuggling networks that are valued at billions of dollars, the Wall Street Journal reports.