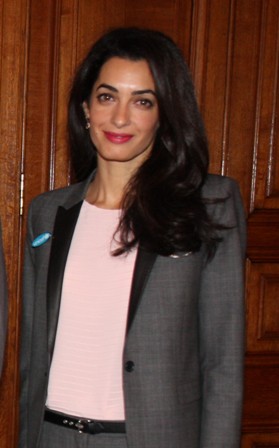 Amal ClooneyIsmayilova, an OCCRP partner, is serving a lengthy prison term on what many human rights organizations call bogus charges.

In an interview with NBC-TV in America, Clooney said she has taken on a case in Azerbaijan "representing a female journalist who has exposed corruption by the ruling regime, and has been subjected to various types of persecution."

The former head of the Azerbaijani branch of Radio Free Europe/Radio Liberty was found guilty on Sept. 1, 2015 of embezzlement, tax evasion, abuse of power and running an illegal business and sentenced to 7.5 years in prison by the Baku Court of Grave Crimes.

Before she was taken into pre-trial detention in December 2014, Ismayilova reported on large-scale corruption and nepotism in the Azerbaijani governmment, notably within the family of Azerbaijan's President Ilham Aliyev.

Ismayilova's stories detailed how the government awarded the rights to a gold mine to the president's family and how the family profits from many of Azerbaijan's largest businesses – including hotels, the telecommunications industry and the construction of a US$ 134 million concert hall to host the 2012 Eurovision Song Contest.

Ismayilova's work has apparently irked the ruling family. She has been repeatedly harassed and said during her trial that Aliyev imprisoned her in order to "hinder her journalistic activity."

In 2012, an intimate video of her and her boyfriend surfaced after unknown agents hid a camera in her bedroom – an event Clooney also mentions during her NBC interview.

Since her imprisonment, OCCRP has continued Ismayilova’s work exposing corruption in the Aliyev regime through an investigative journalism series called the Khadija Project.

Ismayilova's jailing brought reactions from many human rights organizations, including a European Parliament resolution calling for her unconditional release.

Clooney, who is the wife of Hollywood movie star George Clooney, has taken up several high-profile cases at the European Court of Human Rights in the past. Previous clients include WikiLeaks founder Julian Assange, former Prime Minister of Ukraine Yulia Tymoshenko, and former Maldivian President Mohamed Nasheed.

Some Azerbaijani media, such as Trend.az, asserted Wednesday that Clooney is a lawyer "of Armenian descent" who represented Armenia -- a country involved in a long and bitter war with Azerbaijan – before the European Court of Human Rights in a free speech case involving an alleged denial of the Armenian genocide.

According to Reuters, the Guardian, and her Wikipedia entry, Clooney is, in fact, Lebanese. Media heavily reported on her marriage to George Clooney, and Lebanese citizens expressed their opinion about it on France24 – one stating that "It is an honor for Lebanon (....) because that's where she comes from."