Enver Hasani, the former president of the Kosovo Constitutional Court, has been indicted for fraud, according to a Wednesday news release from the Special Prosecutors Office. 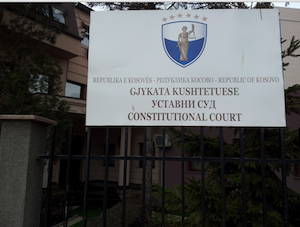 Hasani is accused of abusing his office regarding the appointment or extension of the three international judges of the Constitutional Court of Kosovo.

According to the indictment, Hasani allegedly falsified a signature of one of the three judges, an American, Bulgarian and Portuguese national, who remain on the bench as a legacy of the international oversight of Kosovo, according to Balkan Insight.

The judges were reappointed last summer amid controversy, with Kosovan Ombudsman Sami Kurteshi saying that Kosovan President Atifete Jahjaga’s action in bypassing “the elected representatives of the people in naming judges to the highest court,” was unconstitutional.

A memo acquired by the Balkan Investigative Reporting Network (BIRN) alleged irregularities with the appointments when it was revealed that Jahjaga was allegedly coerced by the European Union rule-of-law mission, EULEX, into accepting appointments without parliamentary approval.

After the court ruled a case inadmissible, speculation arose that Hasani had forged the name of the American judge on the ruling documents, according to Balkan Insight.

Meanwhile, the Special Prosecutor on Wednesday closed a fraud investigation into the current president of the Constitutional Court, Arta Rama-Hajrizi, citing a lack of evidence.

In an unrelated case, Hasani was accused last July of fraud while he served as rector of Pristina University, according to Balkan Insight.