Azerbaijani human rights activist Leyla Yunus was released from prison early today by the Baku Court of Appeals due to deteriorating health, according to Meydan TV. 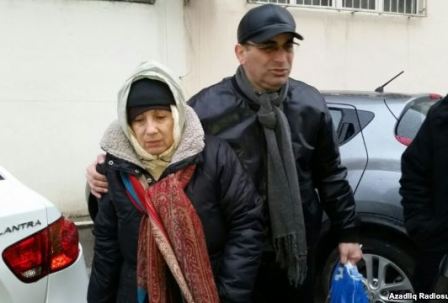 Leyla and Arif Yunus, photo: Radio Free EuropeRadio Free Europe reported that Yunus, who had been sentenced to 8.5 years, had her term reduced to a five-year suspended sentence, her lawyers said.

She joins her husband, Arif Yunus, who was sentenced with her to 7 years but who was released from custody in November, also for reasons of poor health.

Transparency International (TI) had alleged that both of them suffer from serious health issues that grew worse in custody because they did not receive adequate medical attention. Leyla Yunus has diabetes and hepatitis C, and her husband had earlier suffered two strokes. TI also alleged that Leyla Yunus was beaten by authorities while in detention in 2014.

As the head of the Azerbaijani Institute for Peace and Democracy, Leyla Yunus has been a strong critic of Azerbaijan's human rights record, including the treatment of prisoners . Her husband Arif, a historian and political activist, supported her in her work.

Following the Yunuses' arrest in August 2014, Marie Harf, a deputy spokesperson for the US State Department, stated the charges against them are “deeply concerning and represent a further restriction on peaceful civil society activities in Azerbaijan.”

Human Rights Watch said the sentences are “part of the government’s vicious and sweeping crackdown on perceived critics and independent groups.”

The charges brought against them mirror those brought against others who criticized the Azerbaijan government including award-winning investigative journalist Khadija Ismayilova, who uncovered several cases of controversial big-money business deals linked to the family of President Ilham Aliyev.

Ismayilova was arrested Dec. 5, 2014, and on Sept. 1 was sentenced to 7.5  years in prison on charges of embezzlement, tax evasion, abuse of power and running an illegal business.

In September, Leyla Yunus and Ismayilova were named in a US resolution which urges governments all over the world to release their female political prisoners.

The European Parliament also passed a resolution that month calling for the immediate and unconditional release of Azerbaijan's political prisoners, and naming Ismayilova and Yunus specifically. It also called for European Union institutions to conduct a thorough investigation into the corrupution allegations contained in Ismayilova's investigations, which her colleagues are continuing as part of the Khadija Project.

Azerbaijan's government maintains that the Yunuses and Ismayilova were sentenced justly on legitimate charges.