Two people were arrested Sunday when Serbian police found more than 16 kilograms of heroin hidden in a truck crossing into the country at its border with Bulgaria. 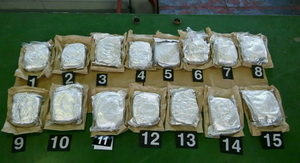 "First analysis results show that the heroin is of great purity, which means that it could be mixed with other substances before street distribution, and its mass would be increased four to five times," said Interior Minister Nebojsa Stefanovic.

Stefanovic called it one of the largest seizures of heroin ever recorded in Serbia, noting that drug seizures have sharply increased over the past 18 months, with police seizing more than four tons of various illegal substances.

The two suspects, whose names were not released, are believed to be part of an organized crime group that smuggles drugs from Turkey into Serbia.

According to the US State Department's International Narcotics Strategy Report for 2015, Turkey remains a major trade center for heroin, cannabis, methamphetamine and cocaine. The drugs usually travel via the heavily utilized Balkan route, and Serbia is a major transit country for heroin and marijuana smuggled to Europe.