Mehriban Aliyeva, wife of Azerbaijan’s President Ilham Aliyev, has been nominated for a Swedish peace prize, it has emerged. 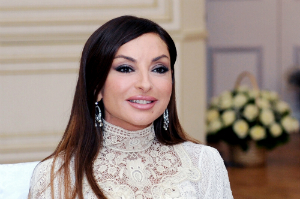 Mehriban AliyevaBut, reports the UK’s Private Eye magazine, the Azerbaijani First Lady is not up for Sweden’s most famous peace award, the Nobel Prize.

Aliyeva has been recognized instead by a mysterious organization known as the Swedish Peace Agency (SPA), based in Gothenburg.

The SPA’s website lavishly describes itself as “the leading international human rights organization”.

The organization’s president, Reza Aghapoor, says on the website that he grew up in “Iranian Azerbaijan”, moving to Sweden aged 29.

Although the organization claims to have existed since 2010, its website was only registered in September of this year, reports Private Eye.

According to the SPA’s submission guidelines for its peace prize, the organization rewards “politicians who figh for peace on Erth [sic], human rights and for a world free of nuclear weapons”.

The organization nominated Aliyeva for her “indispensable role in shaping a positive image for Azerbaijani women around the world”, reports media in Azerbaijan - a fact that is likely to bolster the First Lady’s image in her home country.

Aliyeva is a controversial figure. In 2012, OCCRP named her husband, President Ilham Aliyev, its “Person of the Year” for his links to crime and corruption stories that year.

Aliyeva herself is listed as owner, director or shareholder of a web of offshore companies that were reportedly used by the family to conduct lucrative business dealings worth many millions of dollars.

Azerbaijan, an oil-rich country, has been criticized by international organizations and foreign governments for human rights abuses and crackdowns on free press, including the imprisonment of OCCRP investigative journalist Khadija Ismayilova.

Human rights groups say that the charges against Ismayilova, including tax evasion and running an illegal business, were politically motivated and that she was jailed for her work to uncover controversial business deals in Azerbaijan’s political elite.

The other nominee for SPA’s peace prize is American author and human rights activist Alice Walker.

Private Eye writes that the winner will be announced in “late November or early December,” but the SPA’s website now reports the awards ceremony will be held in Stockholm in in “late December or early Januari [sic] 2016”.