Bulgaria’s biggest cities and major thoroughfares have been blocked every day this week by rallies of police employees protesting proposed cuts to their social benefits. 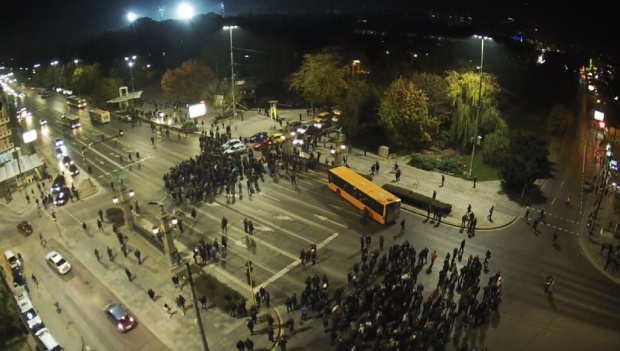 Protestors block a key intersection in SofiaIn the capital Sofia, a rally was also held in front of the National Assembly building with angry demonstrators shouting at lawmakers, “You are scum,” and, “Call the police to guard you now”.

The protests were sparked after an announcement by the Bulgarian Finance Minister that the new state budget would eliminate many of the social benefits enjoyed by staff at the Interior Ministry.

Protestors say the cuts came without warning or discussion.

The new budget cancels a significant privilege enjoyed by the employees: the right to receive up to 20 monthly salaries when they leave the force, which has been halved to 10.

Bonuses for years of service have been eliminated, and paid leave reduced to 20 days a year from the previous 30.

On top of protest rallies, the announcement triggered at least 2,000 resignations and retirements by police employees, many trying to claim their 20 months’ leaving pay while they still can.Interior Minister Rumyana Bachvarova said the resignations would be swiftly approved.

Bulgarian Prime Minister Boyko Borisov, who is also a former chief secretary of the Interior Ministry, reproached demonstrators. He said it was unacceptable for law enforcement to protest illegally and that it set a bad example to society.

Both Borisov and Bachvarova threatened the participants with sanctions.

However, as the rallies continued, locking city traffic in after-work gridlock, the government conceded. It announced that the reduction in benefits would apply only to new employees.

But this and the threat of punishment failed to dissuade the demonstrators, who said they were not rallying only because of the money. They said they were angry about the government’s bad attitude to them as well as poor work conditions.

They said they would continue to block strategic locations until their demands are met.

Bulgarian police are banned by law from striking, but they can protest in their free time. But in the first few days of the rallies, they were deemed illegal since participants had failed to obtain permits for their demonstrations from city halls.

The police protests caused a fresh rift in the already divided Bulgarian society, with some saying that the state as employer should not unilaterally change labor contracts, and agreeing that police work conditions are poor, with shortages of uniforms, fuel, technology and office supplies.

However, since Bulgarian police are often seen as inefficient, the demonstrations and blockades frustrated many other Bulgarians.

A poll by the state-owned Bulgarian National Television showed that 30 percent of respondents supported the demands of the police employees while 87 percent disapproved of the protest.

Official recent polls show that the police have an approval rating of about 30 percent, while 52 percent of Bulgarians don’t believe police will act adequately in solving crimes.

The Bulgarian police force has also drawn criticism for failing to tackle corruption including the demanding and taking of bribes by officers.