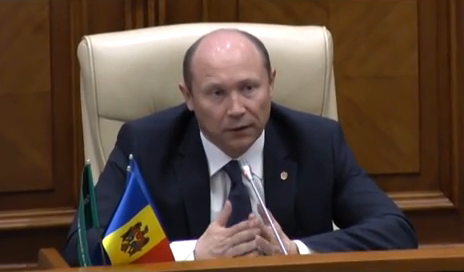 Valeriu StreletStrelet’s ruling pro-European coalition was dismissed by a vote of 65 out of 101 members of Parliament.

This poll followed a motion of no confidence submitted last week by an opposition coalition made up of socialist and communist MPs.

Lawmakers from the Democratic Party of Moldova, which is part of the ruling coalition, also voted in favor of the motion.

Strelet was accused in the motion of complicity in a corruption scandal that has engulfed the small state in recent months involving the disappearance of more than US$ 1 billion from three Moldovan banks. It has seen thousands of people turn out to the streets to protest again and again.

Lawmakers claim Strelet has spent his time supporting his former party leader Vlad Filat, who is now in custody on charges of taking a US$ 260 million bribe – allegations Filat denies.

When Filat was arrested earlier this month, Strelet become the new president of the Liberal-Democrat party.

In the keynote speech to Parliament, Streleţ denied wrongdoing, claiming he was the target of "a well-conducted public campaign of denigration".

He also said he had declared all his wealth, properties and business in the proper fashion, and never sought to conceal anything.

Strelet’s government was sworn in on July 30, 2015, after former Prime Minister Chiril Gaburici announced his resignation on June 12.