Explosions and loud gunfire rocked a neighborhood in the Bulgarian capital Sofia on Thursday morning, close to the city’s downtown area. 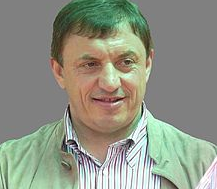 Alexey PetrovAccording to initial reports, the commotion was caused by a grenade launcher attack on a former employee of the Bulgarian National Security Agency, controversial businessman Alexey Petrov.

Petrov, also known as “The Tractor”, is under investigation on charges of leading an organized crime group.

Sofia’s police chief confirmed that his officers were investigating a grenade launcher attack that took place minutes before 9 am. Police were seeking a red Opel automobile, believed to be the gateway vehicle of the shooter or shooters.

Television reports meanwhile showed a large police presence in the area of the attack.

Unnamed police sources told Bulgaria’s Darik radio that the target was Petrov’s car. People living nearby told local media that they had heard two explosions that caused shock and panic.

Eyewitnesses were quoted as saying they saw Petrov stepping out of the vehicle unharmed, but that the car was damaged. Police confirmed that Petrov was unharmed, and that nobody had been injured.

The homes of former Bulgarian chief prosecutor Nikola Filchev and former chief of the Special Operations Force Filko Slavov are also situated nearby the blast. The area was sealed off by police at the time of writing.

Petrov reportedly told Bulgarian online news agency Glasove (“Voices”) that he believed the attempt on his life was a “mistake” since had no reason to believe anybody might wish to target him.

As news broke of the dramatic strike in the heart of the city, Bulgarian lawmakers stopped their work and summoned Interior Minister Rumyana Bachvarova to Parliament.

Bachvarova told them the attack on Petrov was being investigated as a criminal act. She explained that authorities were notified of the attack by a call to emergency line 112 at 8.54 am. The call was placed by Petrov’s security guard 10 or 15 minutes after the explosions.

This is the second apparent attempt on Petrov’s life. The first was a shooting in August 2002, also close to downtown Sofia. He was seriously injured, but survived.

Alexey Petrov is an expert on corporate security and counterterrorism, and president of the Bulgarian and Balkan Karate Federation.

He was arrested in February 2010 in a highly publicized special police operation codenamed “Octopus” and charged with being leader of a criminal group dealing in racketeering, extortion, prostitution, illegal drug trading, trading influence, money laundering, and tax evasion.

In October the same year Petrov was released under house arrest, and the charges were reduced to leading an organized crime group that racketeered and blackmailed two people.

The other charges were finally dismissed in February 2014 when a special anti-mafia court decided to terminate the so-called "Big Octopus" case. Four years after the police operation, the prosecution had still failed to collect sufficient evidence to take the case to court.

The case on the lesser charges is still pending in the special court. It was moved there from the Sofia City Court after the presiding judge was dismissed over allegations of abuse of office. The leading prosecutor in the case was also dismissed recently by Bulgaria’s chief prosecutor.

The “Octopus” and other special police operations were monitored closely by Brussels. If convicted, Petrov was to become the first organized crime boss in Bulgaria to serve jail time.

He is also a onetime business partner of current second-term prime minister Boyko Borisov. They first met in the early 1980s over their common interest in martial arts and later were partners in the 1990s in a security company. Borisov maintains that they have since lost touch.

Petrov ran for President of Bulgaria in the 2011 elections, without success. He denies any involvement in organized crime.

Mob-linked attacks and contract killings are considered part of Bulgaria’s recent past. The last such high-profile attack happened in January 2013, when alleged mobster Zlatomir Ivanov was shot and seriously injured on the steps of the main courthouse in Sofia while going inside to a hearing in an illegal drugs distribution case against him.

The Thursday attack on Petrov comes as Bulgaria prepares for run-offs in local elections on Nov. 1.