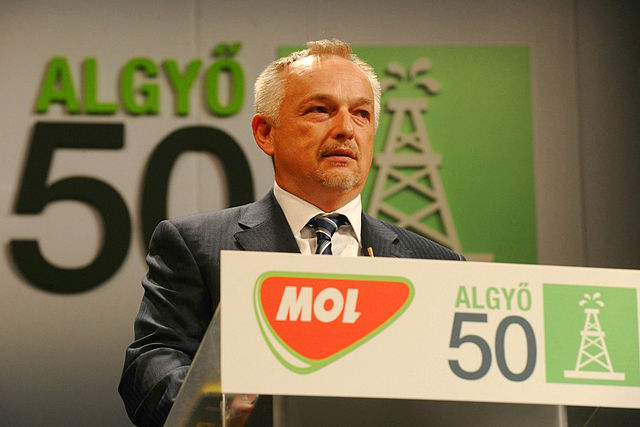 Zsolt Hernádi, CEO of MOLAfter a long and tortured legal battle after which the businessman was thought to have been cleared of official allegations of corruption, documents hint that he could be open to further legal action.

They alleged that in 2009, Hernádi arranged €10 million (US$ 11.35 million) in kickbacks for Sanader in return for a majority stake in Croatian oil and gas company INA, according to The Budapest Business Journal (BBJ).

Meanwhile Hungarian prosecutors said no evidence of bribery had been found by their investigation.

A court in Croatia’s capital Zagreb issued an international warrant for Hernádi’s arrest in 2013 but Hungarian authorities resisted calls to hand him over.

Then Hernádi faced a lawsuit at home in Hungary when Ilona Banhegyi, MOL’s former chief legal counsel, brought a suit against him alleging that the INA-Sanader scandal had caused material harm to MOL.

Meanwhile media published claims that the Banhegyi lawsuit was trumped up to protect Hernádi from facing trial in Croatia. European Union (EU) laws preclude the prosecution of any person on charges for which they have already been acquitted in an EU country.

Following press reports last year that Hernádi had been acquitted in Hungary in the Banhegyi lawsuit, journalists at Atlatszo obtained an anonymized version of a verdict that appears to show the court did not, in fact, dismiss bribery charges relating to the INA-Sanader corruption affair.

According to the document, the court ruled that Banhegyi was ineligible to bring a suit against Hernádi since he was not technically the victim in the case. The court therefore ruled it could neither acquit him nor confirm the original guilty verdict.

If the charges against him were not in fact dismissed, Hernádi could be tried in Croatia if he were extradited or tried in absentia.

Interpol’s website lists Hernádi as wanted in Croatia for “offering a bribe”. They took him off the list in March 2014 but subsequently put him back in February 2015 after Croatia provided additional documents to Interpol.

Hernádi recently travelled to Vienna on business despite the Interpol warrant, according to the BBJ. A MOL spokesperson confirmed the trip and mentioned he had made other, similar trips.