Romania’s National Anticorruption Department (DNA) raided the offices of the country’s Agency for Payments and Intervention in Agriculture (APIA) this week, arresting several of its former bosses. 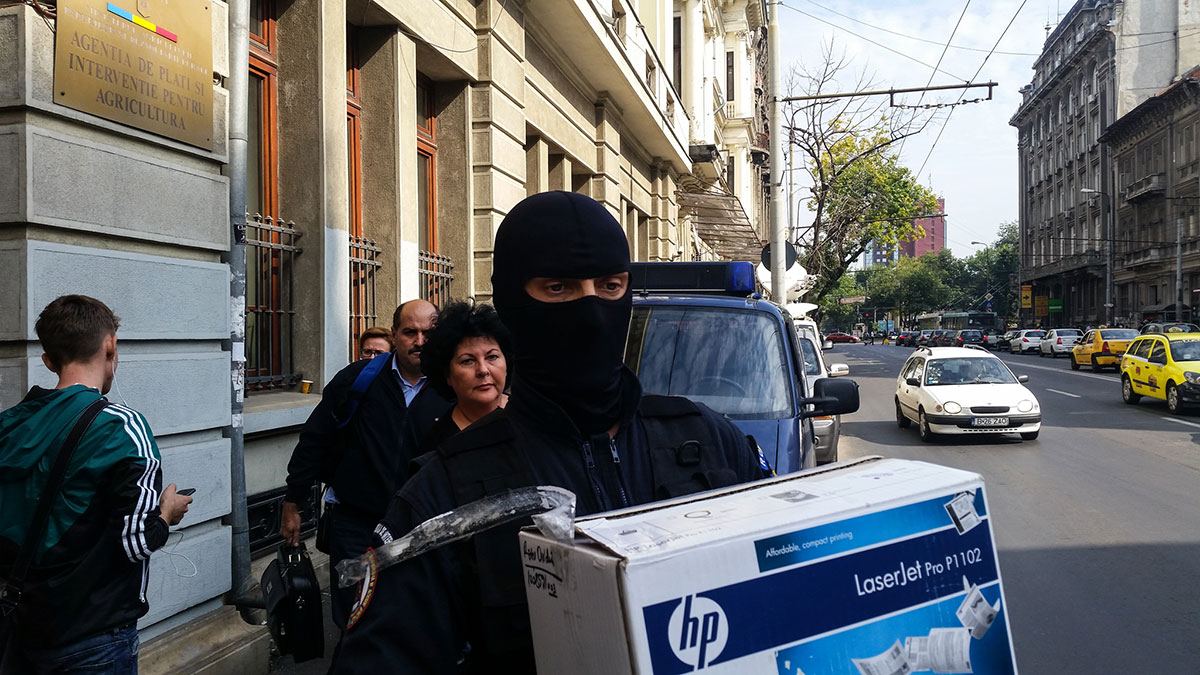 It was a joint operation of DNA, the European Anti-Fraud Office (OLAF) and Romanian intelligence services, mounted as investigations by OCCRP partners Bivol.bg and RISE Romania shed light on the disappearance of €26 million (US$ 29.4 million) from a European food aid program intended to feed Romania’s most deprived people.

The money had been transferred to a Bulgarian company which then vanished without delivering on promises to provide flour and cooking oil. It was paid by the Romanian Ministry of Economy and the sum was to be reimbursed by the European Commission.

In 2012, APIA awarded two out of a total of 11 food aid contracts to Bulgarian firm VM Corporation EOOD, even though the documents submitted by the company did not meet stated tender requirements.

The first contract was worth nearly € 20 million (US$ 22.6 million) and was for sunflower cooking oil intended to be distributed among needy Romanians. The second contract promised flour in return for barley, and was worth more than € 6 million (US$ 6.8 million). The Bulgarian firm received the cash and the barley, but never delivered the flour.

A probe was launched in Bulgaria in relation to the case, but critics say it has not been aggressive enough.

According to a joint investigation into the complex scheme by the Bulgarian site for investigative journalism Bivol.bg and the Romanian RISE Project, the Bulgarian connection leads to the majority shareholders of the Bulgarian First Investment Bank (FIB).

Documents obtained by Bivol and RISE appear to show that on paper, VM Corporation is owned by a destitute man from Sofia, Valeri Petrov, who according to eyewitnesses inspired dismay when he arrived at FIB headquarters by horse and cart.

The investigation further revealed that an apartment in the Bulgarian capital that serves as the registration address for VM Corporation also hosts a network of other companies connected to Romanian businesspeople and FIB management.

When APIA tried to get its money back by executing bank letters of guarantee issued by FIB, worth € 31.5 million (US$ 35.6 million) and originally submitted with the Bulgarian company’s bid, it was met with refusal by FIB.

The Bulgarian bank claimed APIA had never transferred the money into the company’s FIB account, but somewhere else altogether.

After VM Corporation won the second tender, APIA received a set of documents sent on behalf of a company owned by Bulgarian businesswoman Stefka Krasimirova Stoeva.

The documents claimed Stoeva was authorized by VM Corporation to instruct APIA not to transfer the money into the company’s FIB account, but an offshore account held by VM in Cyprus.

According to аn inside source speaking on condition of anonymity, the APIA operation was mounted by associates of FIB, and the bank had even opened the Cyprus account.

The Bulgarian news site Mediapool recalls that in 2014 the Bulgarian Anti-Corruption Prosecutors’ Office showed interest in the case after being alerted by FIB that VM Corporation was defaulting on a loan of €31.8 million (US$ 35.9 million).

The Bulgarian National Bank (BNB) ordered an audit in which experts found a number of violations in the granting of loans to the company, “the most striking of which is that BNB has not been notified for the exposure of the loan, in breach of the Credit Institutions Act”.

The case was passed to the Sofia City Prosecutor's Office which filed the case under the category of “proceedings against an unknown perpetrator for submitting false information to obtain more favorable loan terms” – a crime that under Bulgarian law is punishable by imprisonment of up to a year and a fine of 1,000 to 3,000 Bulgarian lev (between US$ 577 and 1,732).

Under this part of the penal code, only the borrower and guarantor can face charges.

Mediapool writes that this categorization of the case by Sofia City Prosecutor's Office shows it has ignored the BNB audit and the opinion of the anti-corruption prosecutors that this was a "particularly severe case of mismanagement in large amounts" calling for one to ten years of jail time and in which FIB’s management could have been held responsible.