Police in Lithuania’s central Kaunas county announced Tuesday that a record seizure of cocaine has been made after discovering the drug mixed in with shipments of coal. 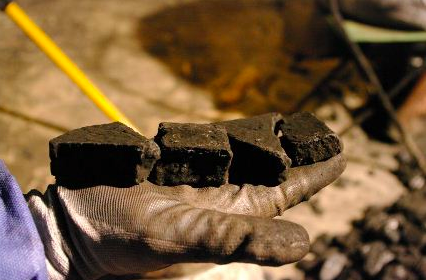 The uncovered cocaine was hidden in coal.Coal seized by Lithuanian police containing cocaine.

600 kilograms of cocaine have been discovered since July by officers who dug through a total of 367 tons of coal by hand, according to Baltic news site Latvijas Avize.

The drugs had been compressed into blocks of the fossil fuel in a high-tech attempt to disguise it.

The first 100 kg was uncovered in freight parcels in July, with another 500 kg discovered this month.

Police say it is the largest cocaine bust ever made in Lithuania.

Estimates put the street value of the seized narcotics at about € 40 million (US$ 44.75 million).

11 people are suspected of involvement. Nine suspects were arrested and, if convicted, could face up to 15 years in prison.

Among them were Lithuanians and at least one Colombian national

One suspect, a man called Vyganto Pankos, still at large is thought to be hiding in Germany.