Azerbaijan: Scuffle Outside Courtroom After Reporters Barred from Ismayilova Trial

Journalists from Azadliq Radio forced to wait outside during a hearing in the trial of journalist Khadija Ismayilova were later attacked by two people emerging from the court. 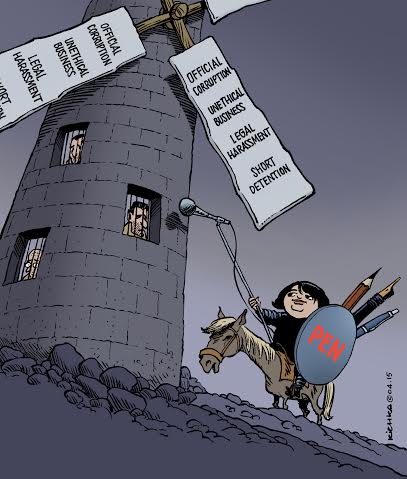 Azadliq reported that none of its journalists were able to enter the courtroom today despite Ismayilova’s demand they be there to cover the trial independently. Only reporters from state media were allowed into court.

While scores of people were left waiting outside, those chosen to enter were reported to have shown little interest in the legal proceedings and even fallen asleep.

When journalists tried to find out who the favored few were as they left the courtroom, a man and elderly woman lashed out at the reporters.

The scuffle was shown in a video posted online by Azadliq.

Journalist Arzu Geybulla tweeted that three journalists Shirin Abbasov, Ravan Seyfullayev, and Orkhan Rustamzade, were detained by police while attempting to cover the trial. They were later released.

Abbasov was one of four journalists from Meydan TV, an independent Azerbaijani online media platform, who were barred from leaving Azerbaijan and placed on a government “blacklist” in June.

One of Meydan TV’s Twitter accounts was suspended for several hours throughout the trial.

Ismayilova’s original accuser Mustafayev has withdrawn his allegations since making an initial complaint, but the court has pursued the charges regardless.

He did not show up at court today. Ismayilova asked if something had happened to him, Azadliq reports.

All three of Ismayilova’s lawyer’s petitions, including one to have her removed from the glass box in which she is forced to sit during proceedings, were dismissed by the judge.

According to reports, she left the courtroom singing.

Before her arrest in December 2014, Ismayilova reported extensively on corruption at the highest echelons of Azerbaijani government.

She believes this is the real reason for her arrest, saying at her last hearing that Azerbaijani President Ilham Aliyev “imprisoned me to hinder my journalistic activity”.

OCCRP has continued Ismayilova’s work exposing corruption in Azerbaijan through the Khadija Project.

Most recently, OCCRP reporters documented the President’s daughter’s ownership of an opulent vacation home in an exclusive Moscow suburb.

Azerbaijan has a poor freedom-of-speech record. Human rights groups say that at least 80 people are currently imprisoned in Azerbaijan on politically motivated charges, including Ismayilova.

The trial will resume August 10.