The Parliament of Moldova has voted in a new pro-European prime minister to tackle financial crisis and corruption in the small ex-Soviet nation. 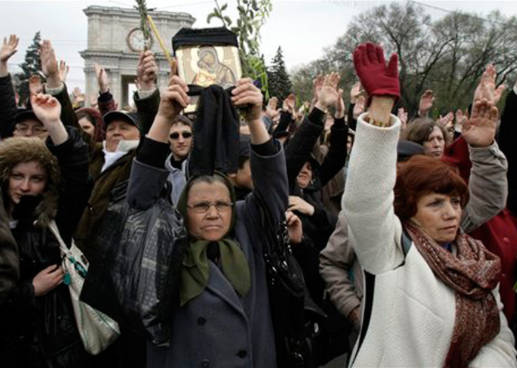 Anti-corruption protests in MoldovaValeriu Strelet, head of the Liberal Democratic Party (PLDP), won the election by a hair’s breadth.

A three-party alliance of pro-Europe MPs provided the 52 votes needed to secure Strelet’s position in the 101-seat Moldovan parliament.

The post of prime minister has lain vacant since June 12, when former premier Chiril Gaburici stepped down after being accused of forging his high school transcript.

Already the poorest country in Europe, Moldova has suffered from a deepening financial crisis since November when, through a series of fraudulent loans and transfers, US$1 billion was stolen from three of Moldova’s largest banks.

The audacious theft, which was finally made public in April this year, amounted to an eighth of the country’s total GDP and left it in political turmoil.

In response, the National Bank of Moldova created 12.5 billion lei (US$ 660 million) and injected it into the three beleaguered financial institutions, causing inflation to double. The three banks are now merged under the central bank.

Speaking before his election, Strelet promised to redress the situation.

Recession in Russia has exacerbated the small country’s woes, accounting for an estimated 4.6 percent shrinkage in Moldova’s GDP. Remittances from Moldovans working in Russia accounts for a substantial slice of the country’s income, bringing in nearly US$ 800,000 last year alone.

Moldova has the potential to prosper, according to Alex Kramer of the World Bank’s local office. He told the Economist: “This should be a booming export economy . . . if they sort out the governance and corruption.”

Strelet, who has been an MP since 2009, now seeks to foster closer ties between Moldova and the EU. He has vowed to fight corruption and set the economy back on the road to health.