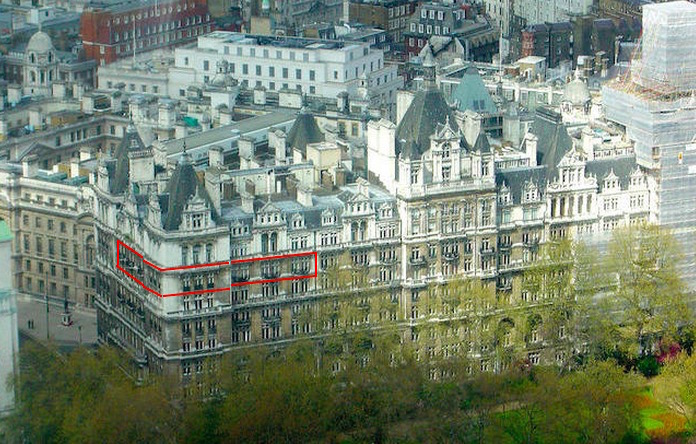 Shuvalov's apartment (in red). Photo: Navalny's blog.According to an investigation by Navalny’s Fund for the Fight Against Corruption, Shuvalov turned two flats into a 500-square-meter luxury apartment, located in Westminster borough, an extremely affluent area of the British capital.

Shuvalov’s anti-corruption declaration for 2014 shows he was renting a flat in London, but Navalny says the documents he obtained from the British land registry shows Shuvalov owns the property, and his claims that he is only renting are “fictitious.”

As for buying the property outright, it would take him 76 years to earn enough salary to pay for it.

The value of the apartment far exceeds Shuvalov’s 2014 declared joint income with his wife, which amounts to close to US$ 900,000. The couple reported various business interests that apparently account for the additional income.

Navalny alleges the deputy prime minister has kept the property secret since 2003 using a myriad of offshore companies linked to him. In August 2014, the ownership passed to a Russian company called Sova Real Estate LLC. According to official records obtained by Navalny, that company is owned by Shuvalov and his wife.

This is not Shuvalov’s only luxury property. According to the Shuvalovs’ anti-corruption declarations, he also rents a castle in Austria. The anti-corruption fund alleges he previously rented a villa in Dubai.

While Shuvalov acknowledged that he owned the castle and other properties through holding companies in a 2014 interview, Navalny claims he has never spoken publicly about the London property.

Revelations of such luxurious dwellings may be of interest to ordinary Russians, who Shuvalov recently said would “eat less” in the face of economic crisis resulting from the current sanctions on Russia.

Shuvalov's spokesman, Aleksandr Machevsky, called the revelations “nothing new” in an interview with the radio station Govorit Moskva, according to Radio Free Europe/Radio Liberty.