French authorities have launched an investigation into money laundering and organized crime activities in France, Monaco and Luxembourg connected to the Magnitsky Affair, the largest tax fraud in Russian history. 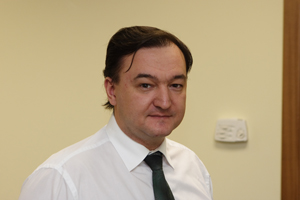 Sergey Magnitski Law enforcement officials have made no public comment on the case, but a source close to the investigation told OCCRP that assets owned by persons in those countries have been frozen.

The theft of US$ 230 million from the Russian Treasury was discovered in 2007 by Russian lawyer Sergey Magnitsky who, at the time, was working for Hermitage Capital Management, then the biggest foreign investor in Russia.

Magnitsky revealed that the fraudulent scheme was a heist perpetrated by Russian authorities and public figures. In 2009 Magnitsky was arrested by the same police officers he accused of covering up the fraud and thrown into jail, where he died after mistreatment and a failure by authorities to address his health problems.

Reporters for OCCRP have been investigating the Magnitsky affair for the past five years, and their findings have sparked criminal cases across Europe. In New York, prosecutors filed a civil forfeiture case against Denis Katsyv, son of a powerful Russian official working in the Russian Railways.

The Magnitsky case ignited a war of sanctions between Russia, the U.S. and the European Union (EU).

The French investigation follows a money-laundering trail brought to light by OCCRP’s journalists in 2012. Reporters from Russia and Moldova established that money stolen from the Russian budget in 2007 was moved through thousands of banking transactions in Russia and then to a number of foreign countries.

One of the routes led to Moldova, where two ghost companies received US$ 52 million from a Russian bank called Krainiy Sever, which played a major role in the Magnitsky Affair. Court records and internal banking documents seen by OCCRP show that the bank accumulated stolen Russian funds and then wired them abroad, mainly to Moldova. Russian authorities later revoked Krainiy Sever’s banking license for money laundering.

From Krainiy Sever the money was sent to two Moldovan companies, Elenast-COM and Bunicon-Impex. OCCRP reporters obtained banking statements of these companies which indicated that the Moldovan ghost companies served as transit points for the stolen funds. From Moldova money went to Latvia, Estonia, Cyprus or Lithuania in the EU.

OCCRP traced part of the stolen funds to the accounts of Vladlen Stepanov, the ex-husband of Olga Stepanova, the head of the Moscow tax office #28 who approved the tax fraud; and to the accounts of a Cyprus company, Prevezon Holdings.

Prevezon was controlled by Denis Katsyv, the son of the ex-minister of transportation, Petr Katsyv. American prosecutors later established that part of the money received by Denis Katsyv was used to buy luxurious property in Manhattan including apartments near Wall Street. That property is now frozen, and a civil forfeiture case is still ongoing in New York. Stepanov’s accounts in Switzerland are also frozen.

The official investigation that followed established that the tiny Baltic country was yet another stopover in a very complex money laundering scheme. The bank accounts of Argenta were managed online from Russian IP-addresses and by a citizen of Moscow whose name has not been released. All the funds Argenta received from Moldova and other countries were sent to other companies and banks.

According to banking records, the largest sums went from Estonia to French and Luxembourg based banks. Based on these findings, in 2013 Hermitage lawyers filed a complaint that resulted in the current criminal case in France. A Hermitage representative told OCCRP that the French authorities had frozen accounts and real estate of two individuals and several companies in Monaco, France and Luxembourg.

Russian authorities, who continued to try Magnitsky even after he died, claimed the money cannot be traced because records were destroyed in a van fire a number of years ago.