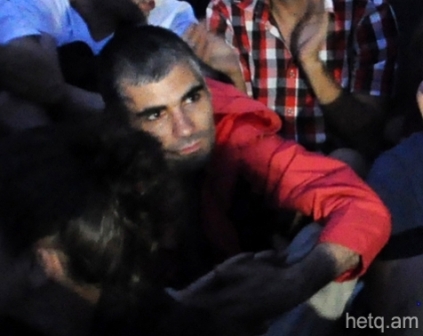 Hrant Galstyan The protest erupted Monday night after the government said that household electricity prices would be going up yet again.

On June 17, the government said it would increase the prices of electricity for households by up to 22 percent. The higher prices mean economic pain for a large part of the population of Armenia, which is suffering a recession including a currency devaluation. Armenia's electricity network is owned by a Russian company and prices have risen three times in the past three years.

As protesters marched towards the presidential palace Monday they were stopped by riot police using water cannons. The protest resumed on Tuesday and according to ABC News, police spokesman Ashot Agaronian said authorities have detained 237 demonstrators, while 11 police officers were injured.

Among those detained were Hetq reporters Hrant Galstyan and Ani Hovhannisyan, who say they were manhandled by police wearing riot gear and black masks. Hovhannisyan was released after a short time, but Glastyan remained in custody for more than eight hours.

He said after his release that he was questioned about “taking part in an illegal gathering and march that disturbed public order.” Galstyan denies these allegations.

''The gathering was peaceful, rather than illegal, and traffic was impeded by the police, who closed the street and used force, and not the protesters,'' he said.

According to Galstyan's lawyer, Grisha Balasanyan, police did not give a reason for detaining the reporters.

The US Embassy in Yerevan issued a statement expressing concern over reports of police brutality, as well as reports that journalists and their equipment were targeted specifically during the protest.