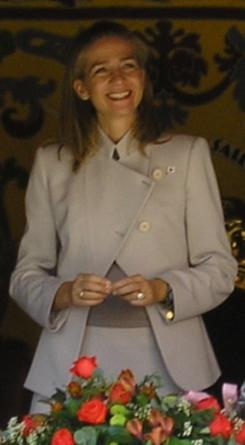 Princess CristinaAmid a simmering tax fraud scandal, King Felipe VI of Spain has stripped his sister of her title.

A royal decree circulated in the Spanish state bulletin this morning revoked Her Royal Highness Princess Cristina’s right to use the title of Duchess of Palma de Mallorca, which had been given to her upon her wedding in 1997.

The Princess’s husband, former Olympic handball player Iñaki Urdangarin, is accused of embezzling € 6 million (US$ 6.75 million) in public funds awarded through contracts to the Noos Foundation, a charitable organization he chaired.

The Noos case first broke in 2011, when police searched the foundation’s premises in Barcelona, reports the Telegraph.

In November 2012, the Spanish Anti-Corruption Office demanded bail of more than € 8 million (US$ 8.95 million) for Urdangarin and his former business partner and co-defendant, Diego Torres.

Spanish newspaper El Pais explains that Princess Cristina became embroiled in the case because she is the joint-owner of a company that allegedly received embezzled funds.

The Princess along with her husband and other defendants were charged in 2014 with fraud and money laundering in relation to the case. In November, the charges of money laundering against Princess Cristina were dropped, but she remains accused on two counts of being an accessory to tax fraud.

Judge Jose Castro of the Spanish High Court of Justice announced in December 2014 that Princess Cristina, her husband and 15 others would stand trial on the tax fraud charges.

Agence France-Press reports that the multimillion-euro mansion owned by the Princess and her husband has been impounded by the courts.

Cristina will be the first member of the once-popular Spanish royal family to stand trial. The case has caused acute embarrassment to the monarchy, which was rocked last year by the abdication of King Felipe’s father Juan Carlos in the wake of a string of unpopular incidents, including the revelation that Juan Carlos had gone on an elephant-hunting trip.

King Juan Carlos stepped down after four decades on the throne in the hope that his son Felipe could reinvigorate faith in Spain’s royal family.

Princess Cristina’s lawyers maintain she is innocent. No date for the trial has yet been set, Reuters reports.