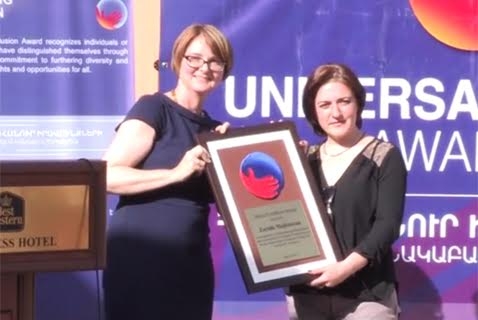 Ambassador Leach with Zaruhie MedjlumyanOCCRP partner Hetq's reporter Zaruhie Medjlumyan has won a “Media Excellence” prize at the 2015 Universal Rights award ceremony in Yerevan, Armenia, for her professionalism and coverage of the rights of those sentenced to life imprisonment.

Katherine Leach, Ambassador of the United Kingdom to Armenia, presented the award to Medjlumyan.

She said: “Reporters throughout the world play a crucial role exposing failures in the judicial system. Certain reporters, in reality, are defenders of rights. Actively and consciously they expose injustices, correct the mistakes, raise awareness, assist individuals and point out system-wide problems. I am happy to announce that this year’s Media Excellence award is given to Zaruhie Medjlumyan.