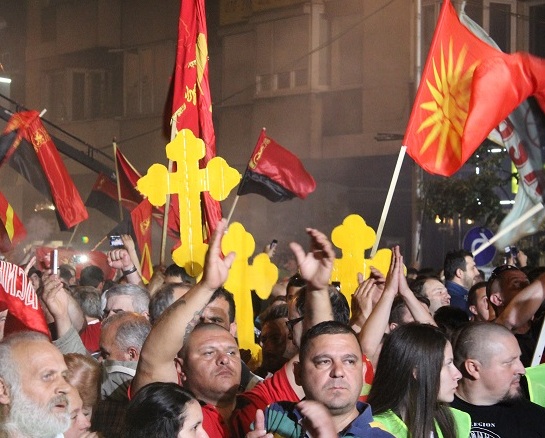 Photo by NovaTV Gruevski, who stands accused by the opposition party of illegally wiretapping 20,000 of his own citizens, spoke to a huge crowd of his supporters in response to the mass anti-government protests that took place on Sunday.

Throughout Monday, the street in front of Parliament was blocked as ruling party VMRO-DPMNE set up a stage where, at 8pm, the rally began.

A number of them also waved flags bearing Vergina Sun, which was the official symbol of the newly independent Macedonia in 1992, until it was changed in 1995 due to Greek objections.

After the band's performance, Gruevski addressed the crowd, reiterating his previous claims that opposition leader Zoran Zaev, of the Social Democrats (SDSM), has conspired to destabilize the country and mount a coup with the aid of an unnamed foreign intelligence service.

Those in the crowd aimed to show they still backed Gruevski, despite recent political turmoil.

"We are here today to give support to the government of Macedonia, as it has produced many jobs and a lot of development for the country," said 55-year-old attendee Zivko Popovski.

"The opposition is skewing the truth in Macedonia. They are sending a false image of the country to the world," he added.

It was the second time in two days that tens of thousands had filled the streets of the small Balkan nation's capital. On Sunday, about 40,000 people turned out to a peaceful rally against Gruevski, in light of revelations that he had illegally surveilled journalists, activists and members of his own government.

Government supporters began to disperse at 10pm, but some stayed in the park in front of Parliament to set up camp, saying they will not leave until Zaev resigns as leader of the SDSM.

It is a mirror of the demands made by protestors on the opposition, hundreds of whom set up camp on Sunday and vowed not to leave until Gruevski steps down.

The pro-government camp has thus been dubbed the "counter-camp" on social networks. The two factions are stationed within a ten-minute walk of each other.

The camps are a manifestation of highly polarized sentiments that now split the Macedonian public, stemming from a dramatic political conflict between the ruling VMRO-DPMNE and opposition SDSM which started when Zaev began to release recordings of what appear to be leaked phone conversations between a number of senior government officials.

Zaev says they are the result of an illegal wiretapping scheme ordered by Gruevski in collaboration with his cousin, former counter-intelligence chief Saso Mijalkov.

Zaev claims the "leaked wiretaps" contain evidence of criminal activities by Gruevski's cabinet and allies, ranging from nepotism and abuse of power to illegal government spending, murder cover-ups, and even the plotting of a conflict between ethnic Macedonians and the country's sizeable ethnic Albanian minority.

Zaev began to release the recordings – known in Macedonia as "bombs" – in February, and has aired a small number of them at each of the series of 33 press conferences held by the SDSM since then.

Prime Minister Gruevski denies wrongdoing and says the recordings were cut and edited.