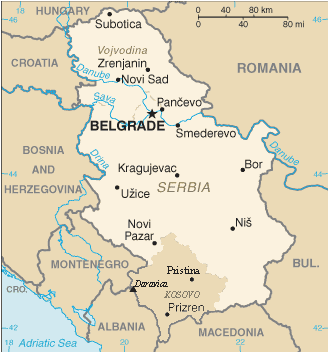 SerbiaAuthorities believe the suspects, aged between 20 and 55, smuggled more than 200 refugees from Syria, Iraq and Pakistan into the European Union (EU) through Bulgaria and Serbia from the beginning of 2015 to the end of March.

The Serbian intelligence agency monitored the group for months, finding that it was formed and operated in the regions of Bosilegrad, Vranj, Vladicin Han and Doljevac. Police say traffickers charged people up to € 1,000 to be transported across the Bulgarian and Serb borders.

The suspects, whose names have not officially been released, were brought to the prosecutor's office in Belgrade for further investigation.

Frontex, the agency that coordinates the border guards of EU member states, said that in recent years, the Western Balkans route has seen the highest increase of Syrian and Somali nationals entering the EU by unlawful means.

Frontex estimates that about 43,360 people used the route illegally in 2014, compared to 2,370 in 2010. Serbia remains a key link in human trafficking between the East and West, with smugglers using an "open taxi" system, meaning that local people profit by organizing transport for migrants through Serbian borders.