Activists gathered in front of Ukraine’s Parliament in Kyiv today to demand the suspension of Prime Minister Arseniy Yatsenyuk and the establishment of a committee to investigate corruption among government officials. 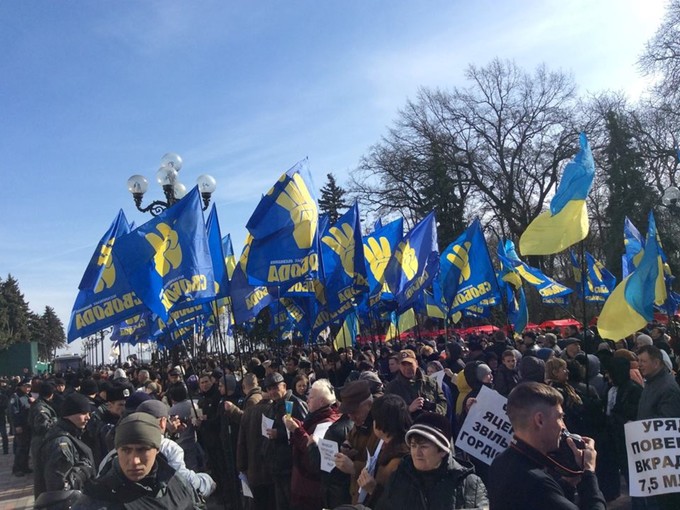 Svoboda protestsIt was reported that the protesters were mostly members of the opposition party Svoboda, a right-wing nationalist party, who sought the creation of an anti-corruption investigative committee as well as the resignation of the prime minister for the duration of the probe.

The Russian state-owned news agency Sputnik reported that hundreds of protesters gathered, while Svoboda claimed it was 2,000.

Chairman of Parliament Volodymyr Groysman promised today that the possibility of such an investigation would be discussed this week, after a group of independent lawmakers blocked the speaking platform in Parliament.

Svoboda MPs Mikhail Golovko and Andriy Illyenko, who supported the campaign for the probe, alleged that the government had chosen to “continue to operate criminal schemes of the old regime”.

The proposal for a committee was raised after the head of the State Financial Inspection of Ukraine, Mikola Gordienko, accused the government of stealing of up to 7.5 billion Ukrainian hryvnia (about US$ 319 million), according to the Kyiv Post. Gordienko was dismissed from his post after making the allegations.

A statement by Svoboda said any politicians who opposed the investigation were “traitors to the Ukrainian people”. Svoboda holds seven out of the 450 seats of the Ukrainian Parliament, called the Verkhovna Rada.

The Ukrainian government has been under pressure to take on the rampant graft that flourished under President Yanukovych, who was ousted in February last year after popular protests.

President Poroshenko recently renewed his promise to tackle the problem.