Two Ukrainian officials suspected of high-level corruption have been arrested during a government meeting being aired live on TV. 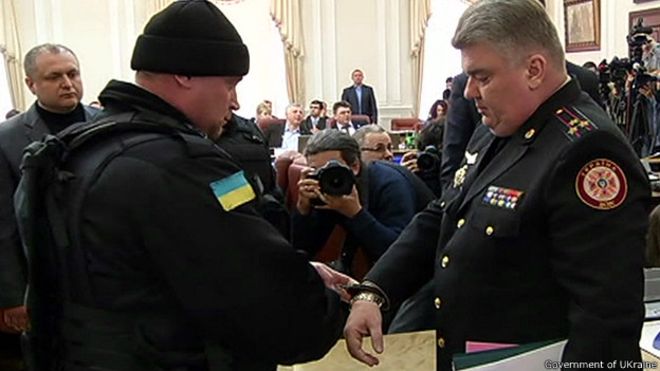 Prosecutors said the two are suspected of extorting bribes from fuel suppliers and embezzling public funds through an offshore company, Al Jazeera reports.

Interior Minister Arsen Avakov pledged that he would also sack the regional heads of the state emergency service over their alleged involvement in the offshore funds scheme.

The dramatic circumstance of the arrests appeared to be a show of muscle by the Ukrainian government, which has been accused of being weak so far in the fight against endemic corruption in the country.

A poll in December showed that 80 percent of Ukrainians do not believe levels of graft have decreased since the fall of President Viktor Yanukovych’s administration in early 2014. Yanukovych is now wanted by Interpol for embezzling millions in state funds.

According to Reuters, Prime Minister Arseniy Yatsenyuk said: “When the country is at war and when we are counting every penny, they steal from people and the state. This will happen to everyone who breaks the law and sneers at the Ukrainian state.”

The arrests follow pledges by Western donors to direct US$ 40 billion in loans to Ukraine over the next four years for the country to begin deep economic reforms and development. This includes a US$ 17.5 billion credit programme from the International Monetary Fund. Ukraine’s government is under pressure to ensure funds are not misused.

Russian opposition activist Alexei Navalny commented on the arrests yesterday by tweeting a claim that his Fund to Fight Corruption (FBK) holds evidence that would lead to the arrests of 90 percent of Ukraine’s ministers.