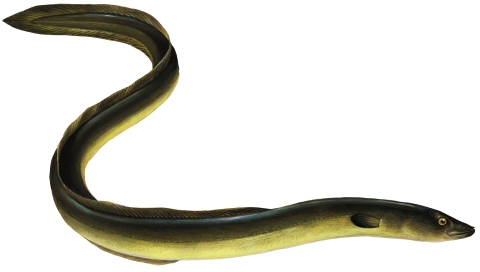 Full-grown Anguilla AnguillaThe alleged smugglers, traveling from Madrid to Sofia, stored the enormous haul of juvenile eels in eight Styrofoam containers and declared them as food items. The baby eels, now smaller than a human finger, can grow to 1.5 meters in length and live for many years.

Customs officers confiscated the eels and sent them to a rescue center at the Varna Aquarium, on the east coast of Bulgaria.

The alleged endangered-fish traffickers, who have not been named, were detained for 72 hours and pre-trial procedures were initiated by the Sofia City Prosecutor`s Office.

The snake-like baby eels belong to a species called Anguilla Anguilla, and it is illegal to transport them through the European Union (EU). They have been officially protected since March 2009  under the Convention on International Trade in Endangered Species of Wild Fauna and Flora (CITES), an international treaty that was ratified by Bulgaria in 1991.