Three men have been arrested in Valjevo in western Serbia on suspicion of human trafficking, along with 27 people believed to be illegal migrants. 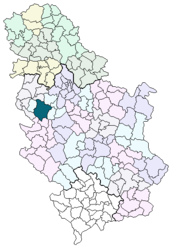 ValjevoOn Jan. 9, Serbia's Ministry of Interior announced that they were holding three men with the initials A.A., R.R., and R.M. on suspicion of transporting and hiding illegal migrants on their way to EU countries. As a matter of policy, Serbian officials do not release full names of suspects unless they are convicted.

The migrants were charged with misdemeanor violation of the Serbian Law on Foreigners.