Rui Chenggang, a business news anchor with state-owned China Central Television (CCTV), was arrested in his studio several hours before his nightly broadcast on charges of corruption, the official newspaper, the People’s Daily, confirmed.

The arrest was abrupt and without notice. Rui’s co-host took over Friday’s program, says Al Jazeera.

The vice-director of financial news of CCTV Li Yong was also taken on Friday. The arrests came one month after several other senior staff were arrested, including channel Director Guo Zhenxi and producer Tian Liwu, says People’s Daily. 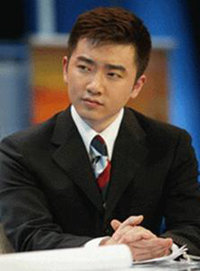 Rui’s admirers applaud him for positioning himself as the epitome of modern China’s aspirations, but his critics decry his nationalist campaigns and confrontational statements, says the New York Times.

He became popular in 2007 with a campaign on his blog that resulted in removal of a Starbucks from Beijing’s Forbidden City, says the New York Times. It was replaced by a Chinese-owned coffee shop. At a G20 summit in 2010 in South Korea, when U.S. President Barack Obama asked for questions from the Korean media and no one spoke up, Rui said: “I’m actually Chinese, but I think I get to represent the entire Asia.”

According to the Financial Times, Chinese President Xi Jinping, elected last year, began an anti-graft campaign that is a part of the government’s efforts to maintain the legitimacy of the Communist party’s rule.

The New York Times reports that the hope is to strengthen a Party, weakened by lack of discipline. A former high-level military general was stripped of party membership last month on allegations of corruption.

An anti-corruption expert at Beihang University in Beijing Ren Jianming, said that the government is targeting corruption in state-controlled sectors, reports People’s Daily.