Authorities in Peru are investigating a criminal organization dedicated to land theft, a crime that frequently involves official corruption and particularly impacts impoverished and rural populations.

According to authorities, the ring is based in the city of Chiclayo, in Peru's western Lambayeque province, and includes members from remnants of Peruvian criminal gangs "La Gran Familia" and "El Nuevo Clan del Norte," who invade territories, displace occupants and impose land taxes. They particularly target abandoned and disputed lands, reported Peru 21. 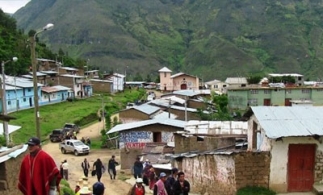 The criminals reportedly pass themselves off as lawyers and record the falsified property deeds in the Public Registry with the support of corrupt public officials, including judges, lawyers and police officers.

"They take possession of land and negotiate its return with the true owners, or they sell it to front men... They hire people to take over the lots," a source from the Attorney General's Office told Peru 21.

The regional head of the National Superintendency of Public Registries (SUNARP), Rafael Pantoja, said there had been 77 reports of land trafficking in Peru so far in 2014.

As this case demonstrates, official complicity is a key factor in the operations of land thieves, who rely on cooperation to falsify and register property titles. Corruption is a major issue among Peruvian authorities at all levels -- in Lambayeque, a police chief was arrested for cooperating with El Nuevo Clan del Norte in December 2013.

The SUNARP head said various land trafficking operations exist in Peru. In one case last year, various workers from a civil construction company were arrested for allegedly participating in one such network in Lima.

Land theft is prominent in various countries in the region, and is frequently tied to drug trafficking. Illicitly occupied territories are often used to build ranches through which drug profits can be laundered, as well as to build clandestine airstrips and trafficking routes. As such, land is a precious commodity for criminals and is often a major driver of conflict and forced displacement, as seen in places like Colombia.

The crime often affects poor rural populations, as seen with the targeting of indigenous territories in Nicaragua, and the seizure of vast swathes of agricultural land by rebel and criminal groups in Colombia's conflict. However, authorities have also dismantled urban land trafficking networks in the likes of Guatemala and Ecuador.

By Mimi Yagoub. Used with permission of InSight Crime.