The Vatican has accepted the resignation of a German bishop over his extravagant spending, which includes a US $43 million remodel of his residence and offices in Limburg.

The Vatican said Wednesday that Bishop Franz-Peter Tebartz-van Elst would be given a new assignment “given that a situation exists … which prevents the fruitful exercise" of his office, reports Catholic News Service. 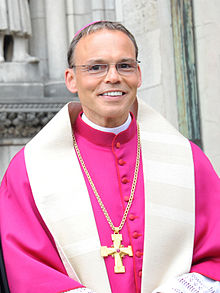 According to Deutsche Welle, Tebartz-van Elst said in October that his renovation project cost more than five times its original estimate of US $7.5 million.

The bishop was temporarily relieved of his duties by Pope Francis, but the Pontiff did not accept Tebartz-van Elst’s resignation until yesterday.

Last month Spiegel released a report which says that the bishop’s remodeling project was financed by funds siphoned from at least one church foundation in Tebartz-van Elst’s diocese, reports Deutsche Welle.

The resignation came after an audit by the Vatican's Congregation for Bishops says Catholic News Service.

According to Deutsche Welle, “Germans were outraged over the possible misuse of church funds which come from donations and a special ‘church tax’ paid by registered parishioners to their respective denominations.”

In a separate case, Tebartz-van Elst paid more than US $27,000 in November over a perjury case relating to his alleged first class flight on a charity trip to India.

According to Catholic News Service, the president of the bishops’ conference Cardinal Reinhard Marx said the case was handled fairly and that the resignation would "end a period of uncertainty" in the Limburg Diocese.

Financial scandals have been rife in the Catholic Church.

In June 2013, Monsignor Nunzio Scarano, known as “Monsignor 500 Euros” for his habit of flashing large wads of money, lost his position after being charged by authorities with using the Vatican Bank to help an Italian shipping company conceal its assets from Switzerland.

According to al Jazeera, Scarano, who is under house arrest, is also facing criminal charges for money laundering.

Charles Zech, director of the Center for Church Management and Business Ethics at Villanova University, said that in the United States, dioceses (which are local religious districts supervised by bishops) have substantial autonomy from Rome, and can bring in as much as US $8 billion annually from collections.

However, he said few parishioners know what is actually done with the money that is collected. “It’s like a black hole,” he said.