In an appearance before Belgrade’s Special Court for Organized Crime on Monday, accused drug lord Darko Šarić pleaded not guilty to charges of drug trafficking.

Šarić, along with other alleged members of his drug ring, is accused of smuggling several tons of cocaine from Latin America to western Europe in 2008 and 2009, reports B92. 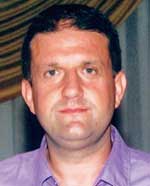 After more than four years on the run, Šarić turned himself in to Serbian authorities on March 18, saying he did so to avoid a bloodbath.

As OCCRP reported, Serbian Minister of Justice Nikola Selaković said that Šarić did so after learning the police were hot on his trail.

However, during his court appearance Šarić said that the prosecutor was pretending to be Sherlock Holmes and that the indictments are false, “a smokescreen by the former regime to obscure their own thieving.”

Šarić added, “I have been meeting with and collaborating with influential people who hold positions and with the rich. They are over there, I am here.”

The case is comprised of six indictments against 39 alleged members of Šarić's group, reports B92. Of those, Šarić, Nikola Dimitrijević, and 12 others appeared in court on Monday. Nine pleaded guilty, three are cooperating as witnesses, and the others are on the run.

Šarić is also accused of money laundering, and is being investigated for investing his drug money in and privatizing Serbian businesses.

Authorities have seized many of Šarić’s assets since he went on the run in October 2009, including villas, apartments, stores, companies, hotels, and cars.

“Everything's like in American movies when one get set up, but I hope that the film will end and that I will prove that I am innocent,” he said in court.