Colombia and Venezuela are to launch a new anti-smuggling initiative in an attempt to crack down on the huge amounts of contraband crossing their border daily, but local corruption could well prevent any major progress. 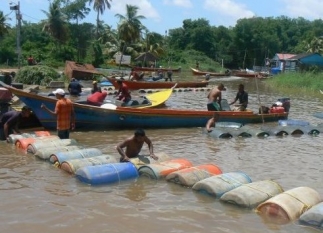 Cabello said security forces in the border region would be strengthened and ordered to look for new ways to reduce contraband.

Until more concrete details about specific measures emerge -- if they emerge -- it is difficult to make any predictions about the plan's likely success. But like many Venezuelan government announcements, this one appears to contain many words and little substance. Only six months ago Maduro announced a new "civic-military" task force would be created to patrol the border with the aim of stamping out smuggling, but little has changed.

What is certain is authorities will face serious challenges since roots of contraband run deep. There is widespread corruption of Venezuelan security forces and evidence of their direct participation in organized crime.

Corrupt cells of the Venezuelan military are long believed to have exchanged weapons for drugs with Colombian rebels in the border region, and they are now involved in major international drug trafficking operations. Meanwhile, corruption of regional security forces tasked with monitoring border crossings is also common. Such activities continue unhindered primarily due to the military's status as the government's primary powerbase.

Moreover, the massive amount of contraband passing over the border each day -- gasoline and beef among the principal products, with the trade controlled by major Colombian criminal organizations -- is directly fueled by Venezuela's economic system. The government sets strict price controls on certain products, which combined with currency controls that have made the US dollar and Colombian peso immensely valuable on the black market, means goods can be purchased at absurdly cheap rates inside Venezuela and sold for huge profits in Colombia.

By Miriam Wells, used with the permission of InsightCrime